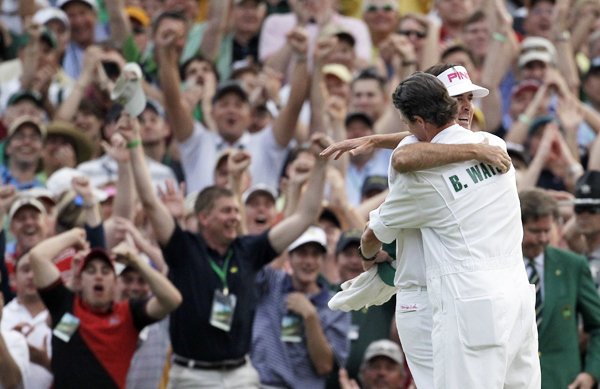 
AUGUSTA, Georgia - Bubba Watson started the day by watching the rarest shot in golf tournament history. He ended another thrill-a-minute Sunday at Augusta National with a signature shot of his own to win the Masters. 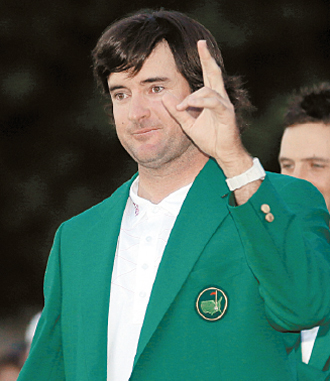 Bubba Watson waves after putting on the green jacket following his win at the Masters golf tournament in Augusta, Ga., Sunday.[AP/YONHAP]

It was a page right out of “Bubba golf.”

While so deep in the trees right of the 10th fairway that he couldn’t even see the green, Watson hooked a gap wedge off the pine needles from 155 yards to about 10 feet from the hole. That led to simple par, good enough to beat Louis Oosthuizen of South Africa on the second playoff hole.

It was Oosthuizen who set the tone for this wild day with a double eagle - only the fourth in Masters history - on the par-5 second hole when his 4-iron from 253 yards landed on the front of the green and rolled some 90 feet into the hole for a 2.

And it was Watson who hit a shot that only he could even dream of pulling off.

“Hooked it about 40 yards, hit about 15 feet off the ground until it got under the tree and then started rising,” Watson said, “Pretty easy.” The hard part was holding back tears.

He was blubbering hard on the 10th green, shoulders heaving and face contorted, for so many reasons. Just two weeks ago, he and his wife adopted a baby boy, Caleb. The first person on the green was his mother - his father died right after the Ryder Cup in 2010. He held her tight and cried on her shoulder. 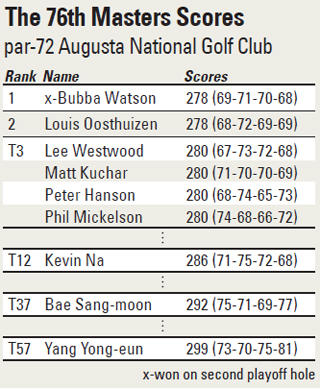 As incredible as it all seemed, Gerry “Bubba” Watson, Jr., the powerful lefty with a million shots at his disposal, was the major champion.

“I never got this far in my dreams,” Watson said in Butler Cabin, where defending champion Charl Schwartzel helped him into the green jacket. “It’s a blessing. To go home to my new son, it’s going to be fun.”

Oosthuizen was trying to join Gene Sarazen in the 1935 Masters as the only major champions to win with a double eagle in the final round. The former British Open champion made one clutch putt after another on the back nine, none more important than a 4-footer on the 18th for a 69 to force the playoff. Both had a good look at birdie at No. 18 on the first extra hole and missed.

Watson, dressed all in white and using a pink driver, hooked one into the trees, and it appeared he would have no shot at reaching the green. Oosthuizen followed, clanged off a Georgia pine and was left with 231 yards to the green. He came up short.

That’s when Watson, who rarely hits a shot on a straight line, came up with the most magical shot of his life.

“I was there earlier today, during regulation,” he said. “So I was used to it. I knew what I was facing there. I had a good lie, had a gap where I had to hook it 40 yards or something. I’m pretty good at hooking it.”

Oosthuizen was in the fairway. All he could see was a corridor of fans leading into the woods.

“I had no idea where he was,” Oosthuizen said. “Where I stood from, when the ball came out, it looked like a curve ball. Unbelievable shot. That shot he hit definitely won him the tournament.”

They finished at 10-under 278, two shots ahead of four players who kept it close and made the Masters as compelling as ever.

Phil Mickelson, playing in the final group for the fourth time, recovered from a triple bogey on the par-3 fourth hole and still managed to stay in the game. He could only make two-putt birdies on the two par 5s on the back and shot 72.

Lee Westwood of England ran off three straight birdies, but the last one hurt. He had an 8-foot eagle putt to tie for the lead on the 15th and missed it, and a final birdie on the 18th gave him a 68 and only made it look close.

“I don’t feel like giving up just yet,” said Westwood, who had his seventh top-three finish in a major since the 2008 U.S. Open.

Matt Kuchar tied for the lead with a short eagle putt on the 15th, then bogeyed the 16th for a 69. Peter Hanson of Sweden, who had a one-shot lead going into the final, closed with a 73.

Watson, a 33-year-old from the Florida Panhandle, won for the fourth time in his career and moves to fourth in the world, making him the highest-ranked American in golf.

And he created a legion of fans - especially in Georgia, where he returned to school to get his degree - who chanted, “Bubba! Bubba! Bubba!” as he hugged anyone he could find on the 10th green.

“I don’t play the sport for fame. I don’t try to win tournaments for fame,” Watson said. “I don’t do any of that. It’s just me. I’m just Bubba. I goof around. I joke around. I just want to be me and play golf.” AP