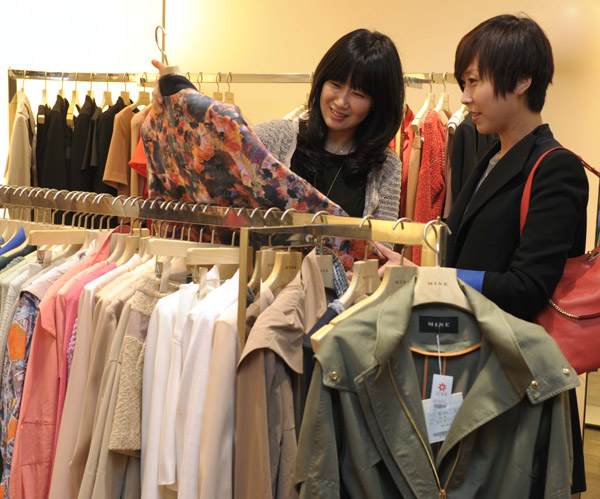 Older shoppers check out clothes at Mine, a young casual fashion brand at Shinsegae Department Store in Seoul. Provided by the department store


The sight of homemakers in their 30s, 40s and 50s checking out designer clothes created with customers 10 to 30 years younger in mind is becoming increasingly common at department stores across the nation.

“I mostly buy clothes here because I like this brand’s style and it really fits me well,” said Seo Hyeon-ju, a 43-year-old homemaker who was checking out clothes at an outlet of ab.f.z. at Shinsegae Department Store in Chungmuro in northern Seoul, one afternoon last month.

Seo was wearing a leather jacket and skinny jeans at the time of her shopping spree, items often favored by fashion-savvy consumers in their 20s.

Meanwhile, at Lotte Department Store’s Sogong headquarters that same day, 50-year-old homemaker Moon Hye-sook was checking out a trench coat at a Nice Claup outlet. Nice Claup is a young casual brand that also targets people in their 20s.

As middle-aged women are dressing younger, fashion industry terms such as “casual wear for 20s” and “suit shoes for 50s” are crumbling.

This trend has already taken root at Shinsegae Department Store, which reported that 35 percent of its first-quarter sales of young casual women’s wear was generated from female customers in their 40s to 60s.

In an interesting reversal, Shinsegae put eight crocodile skin bags on sale at its Handbag Collection concept store earlier this year, and they sold out within two months. Usually, such bags are favored by middle-aged and older women, but the majority of buyers this year were women in their 30s.

Meanwhile, Land Rover put 1,000 pastel-colored candy shoes on sale last September, targeting teens, and saw them quickly sell out due in large part to demand from an older demographic.

“Surprisingly, many customers in their 30s and 40s also bought these shoes,” said a sales employee at one of the brand’s outlets at Shinsegae.

The trend is not limited to women.

Korean shoe maker Kumkang released a retro classic-style collection of suit shoes called Heritage Seven targeting businessmen in their 50s recently and found that demand was equally high among consumers in their 20s, despite the 400,000 won ($353) price tag.

“As more middle-aged men adopt a casual look in the office together with the spread of leisure culture and companies’ relaxed dress codes, many businessmen are now emulating the look of someone much younger,” said Park Jeong-won, an employee at Kumkang.

“In contrast, customers in their 20s are familiar with luxury items these days and don’t object to paying more for classic-style items.”

So Jeong-seop, a buyer at Shinsegae, believes the blurring of fashion’s age barriers will continue as middle-aged women define themselves through clothing styles that reflect how they feel rather than how they look.

This new trend has forced makers of middle-aged women’s wear to devise new marketing strategies in order to survive in a cutthroat marketplace.

Some of these brands have even stopped selling larger sizes as their consumers become slimmer and develop a taste for tighter cuts and younger-looking casual fashion. Others have shortened the length of each skirt by 10 centimeters and made jacket sleeves thinner and more revealing.