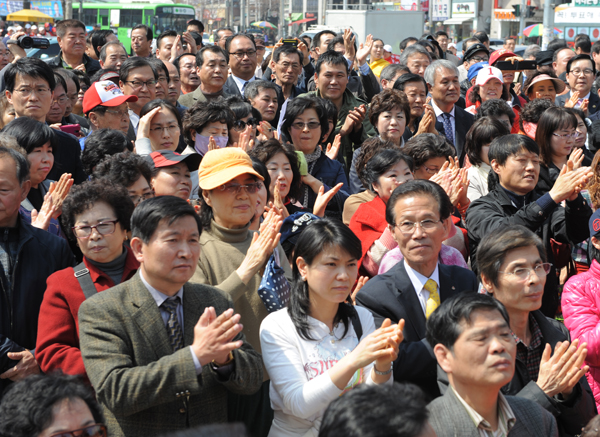 
The outcome of tomorrow’s legislative elections is totally up in the air with so many neck-and-neck races around the nation.

But it’s looking likely that no single party will have an absolute majority in the new National Assembly, for which it would need more than 151 lawmakers. The big question becomes which party has the most short of a majority. The party with the most lawmakers selects the speaker of the house and has power over who heads committees.

Voters will cast ballots tomorrow to elect lawmakers representing 246 constituencies and 54 proportional representatives, but polls so far showed hard-to-predict outcomes in the most-watched races in Seoul.

An analysis by the JoongAng Ilbo of recent surveys showed that outcomes were unpredictable in at least 90 constituencies as the gaps between the front-runners each fall within the margin of error.

“The ruling and opposition parties both agree that neck-and-neck races are taking place in at least 50 constituencies in the capital region alone,” Representative Lee Hye-hoon, a chief campaign manager of the Saenuri Party, said yesterday. “Those areas will decide which party will win the ultimate victory.”

Park Yong-jin, a spokesman of the Democratic United Party, also said yesterday that the matches are too tight to predict. “Who knows what will happen?” Park said. “The predictions change from the morning to the evening, and the analyses are different depending on who does it. It’s a total fog.”

Agreeing that it will be an unusually tight election, analysts think the largest and the second-largest parties will win 130 to 140 seats.

“There is a larger chance that the Saenuri Party will have more than 130 stably, but it will be unrealistic for the Democratic United Party to win 140 alone,” Yoon Hee-woong from the Korea Society Opinion Institute, told Yonhap News Agency.

Much depends on voter turnout and which voters come out in force: conservative older voters or liberal young people.

“The Saenuri will be the majority party by a small margin,” he said, adding that the situation is not favorable to the liberal opposition as President Lee Myung-bak’s approval rating is still over 30 percent.
A joint survey conducted by the JoongAng Ilbo, SBS, East Asia Institute and Hankook Research also showed that about 63 percent of the respondents said they want to pass judgement on the Lee administration, while 58.5 percent said they want to judge the opposition parties. The survey, conducted from March 30 till April 1, showed that 30 percent said they will vote for Saenuri candidates in the legislative election, while 29 percent said they will vote for the DUP candidates. 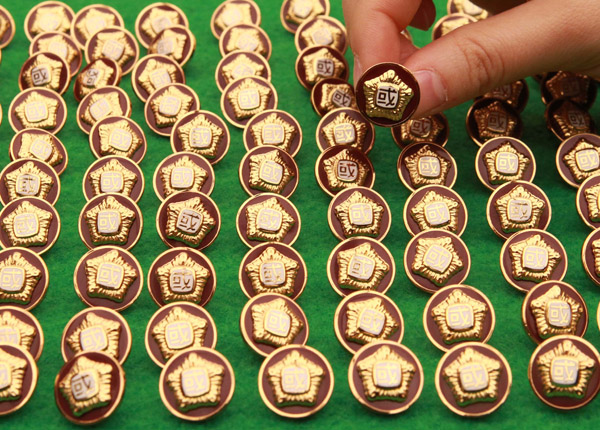 Badges for new lawmakers who get elected in tomorrow’s legislative elections are shown to the media yesterday at the National Assembly. By Kim Hyung-soo


The competition is swinging to which party will have the most lawmakers because of the benefits that come with that standing.

Under the National Assembly Act, the speaker, who regulates the legislature’s proceedings, maintains order and supervises its affairs, will be elected for a two-year term after the general election.

Traditionally, the largest party’s longest-serving member has served as the National Assembly speaker.

“Even if the largest party outnumbers the second-largest party by one seat, it is a matter of tremendous difference,” said a National Assembly official. The speaker’s power to advance a bill to a voting session, as well as to mobilize security guards of the legislature, are seen as powerful tools.

The largest political party inside the Assembly will also have the advantage in negotiations to decide the heads of key standing committees.

If neither the Saenuri or Democratic United parties has an absolute majority, the votes of the minor political parties will also become more important than ever.

The Unified Progressive Party has already made public its ambition to become a negotiating party on its own for the first time in the legislature. Under the National Assembly Act’s Article 33, any political party having 20 or more lawmakers can organize a negotiating party.

The prospect that the combined number of lawmakers from the UPP and DUP will outnumber the Saenuri Party clearly threatens the conservative ruling party. Representative Lee Hye-hoon said the Saenuri Party wants to stop the DUP and the UPP at all costs from winning more than 151 seats combined. “Korea’s future will become a hostage of their obsolete ideology if the two parties jointly win an absolute majority,” she said.

The conservative minority Liberty Forward Party, however, is facing a crossroads. The third-largest party, which won 18 seats in the 2008 election, is struggling even in its traditional stronghold of Chungcheong. Recent polls have shown that the LFP will win five to six seats.

“The upcoming election will decide whether Chungcheong politicians will live or die,” Sim Dae-hyung, the LFP chairman, said Sunday, appealing to regional sentiment to protect the party.

Perhaps the most crucial factor in tomorrow’s election is turnout. Generally, a higher turnout is advantageous for the liberals, while a lower turnout is advantageous for the conservatives. In 2004, the turnout was 60.6 percent and the Uri Party, the predecessor of the UPP, won an absolute majority. In 2008, the turnout was only 46.1 percent, and the Grand National Party, the predecessor of the Saenuri Party, won an absolute majority.

Experts said 55 percent is the turning point. A turnout higher than that will be advantageous to the DUP, while lower will benefit the Saenuri Party, they predicted.

And yet recent elections did not have a turnout higher than 60 percent, except for the 2004 legislative elections that took place in the aftermath of the GNP’s impeachment of then President Roh Moo-hyun.

The DUP has launched a massive campaign to increase the turnout. “Liberal candidates can win in the tightly contested areas when the turnout is higher than 60 percent,” said Representative Park Sun-sook, a chief DUP campaign manager. “And that will lead us to the ultimate victory.”

According to the JoongAng Ilbo’s analysis into the past legislative election polls, tomorrow’s turnout will likely be in the low 50 percent. In past elections, the actual turnouts were about 11 to 14 percentage point lower than the poll outcomes asking people if they will vote. In the 2008 election, 60.1 percent said they would vote, but only 46.1 percent actually showed up.

In the latest JoongAng Ilbo poll, 63.1 percent said they will vote, and the actual turnout is expected to be about 49 to 52 percent.