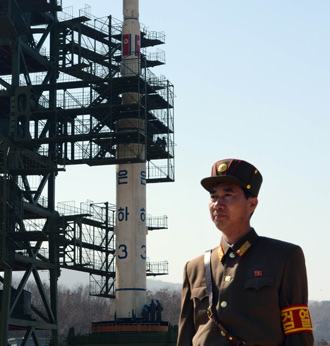 A soldier stands near the North Korean Unha-3 rocket at the Tongchang-ri launch pad on Sunday. [AFP/YONHAP]

Foreign reporters had a firsthand look at North Korea’s long-range ballistic rocket and its alleged payload, an earth-observing satellite, and saw the rocket in position at a launch pad.

About 70 reporters from foreign news agencies were invited into the reclusive regime as observers for the upcoming satellite launch in celebration of the centennial of North Korean founder Kim Il Sung’s birth next Sunday.

The journalists arrived in Pyongyang between Friday and Saturday, and were taken to the coastal Sohae Satellite Station in Tongchang-ri in northwestern North Korea on Sunday by a special train.

After a five-hour-long journey passing farmland and barren fields, they went through three body checks each.

Hidden behind a fold in hills, the three-stage Unha-3 rocket appeared fully assembled and installed on a launch platform, ready for blast-off between Thursday and April 16. The reporters got 50 meters (164 feet) away from the missile.

Painted in white and emblazoned with the North Korean flag and “Unha-3”, the rocket is 30 meters tall, weighs 91 tons and has a diameter of 2.5 meters. Some engineers in blue helmets were working on stairs surrounding the rocket, while soldiers were on guard nearby.

Engineers gave the journalists a guided tour of the command center and allowed them a close-up look at the 100-kilogram (220-pound) satellite that is supposed to be mounted on the Unha-3 rocket.

A black-colored box with five antennae, the satellite was covered by solar panels to supply it with electricity. Pointing at a large-size map on the wall, engineers described the site near the launch pad.

In the control room, technicians in white-colored uniforms were seated in front of laptops. There was a large monitor on the wall to track the trajectory of the rocket. The guide told reporters that everything in the control room was ready for the launch.
Jang Myong-jin, general manager of the launch facility, said preparations were well on track for liftoff, with international space, aviation and maritime authorities ready, and that fueling will begin soon.

But he didn’t give exact details on the timing of the fueling or the mounting of the satellite.

Stressing the civilian purpose of the rocket launch, Jang refuted accusations that the launch was a disguised test of a missile launch for military purposes.

“To say this is a missile test is really nonsense,” Jang told reporters, translated by an interpreter. “This launch was planned long ago for the 100th birthday of president Kim Il Sung. We are not doing it for provocative purposes. No matter what others say, we are doing this for peaceful purposes.”

In the control room, a BBC reporter asked whether North Korean officials think if it’s right to spend a lot of money on this program while the regime has problems feeding its people.

Jang also told reporters that the satellite launch wasn’t a violation of the recent aid-for-denuclearization deal with the United States.

“During the recent senior-level North Korea-U.S. talks, our side made clear there’s only a moratorium on long-range missile launches, not on satellite launches,” he said. “The U.S. was well aware of this.’’

French expert Christian Lardier, a member of the International Academy of Astronautics who accompanied the reporters, told CNN, “I don’t know what they want to do in the future, but today, what we see is a space center.”

But Lardier also told AFP, “This technology can be used for military ends.”

The rocket consists of four middle-range missiles, said Tsutomu Taguchi, a Japanese military expert who has analyzed images of the rocket. Four engine nozzles were evident in the first stage of the rocket.

Taguchi told NHK yesterday that the four missiles show the military purpose of the rocket launch, and if the launch succeeds, it will mean North Korea now possesses the technology to control large missiles with a far-reaching target range.