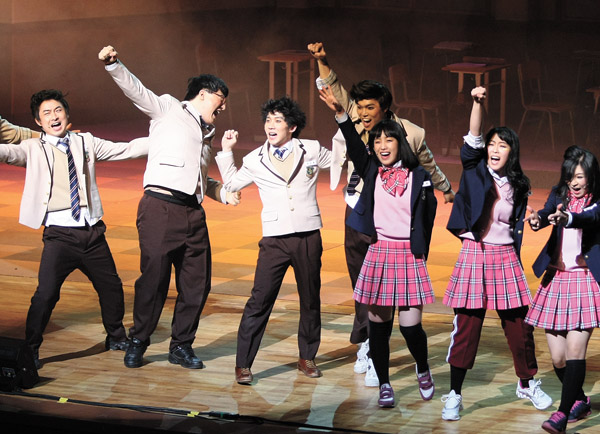 In an innovative approach to spreading awareness about the prevention of violence in school, actors and actresses dressed as high schoolers sing and dance at the Daegu Cultural Center for Students on Saturday. By Gong Jeong-sik


As the music is cued up, 10 actors and actresses dressed in school uniforms spring out of the audience seats and rush towards the stage. They begin dancing to the fast-beat tempo of the popular children’s song “School Bell is Ringing.”

But despite the upbeat music, choreography and colorful uniforms, the story that unfolds before an audience of 400 elementary, middle and high school students at the Daegu Cultural Center for Students on Saturday is a dark one.

The musical addresses the issue of how to prevent violence in schools and bullying, especially in the aftermath of the shocking suicide of a bullied middle school student in Daegu last December.

Daegu Metropolitan City took an innovative approach to spreading the message - through singing and dancing.

The musical, “A Flower Blooms on a Cactus,” depicts the story of a coed freshman class in high school. One male student, Sung-tae, who is the jjang, or leader of the class, bullies the outcast of the class, Won-hee.

The motif of the musical is familiar to the story of the 13-year-old boy surnamed Kwon from Daegu who was incessantly bullied by classmates before he jumped off a seventh floor balcony on Dec. 20, 2011, leaving behind a four-page suicide note detailing the threats and violence he had suffered. Two of his classmates regularly took money from him, beat him and humiliated him. Kwon wrote in his suicide note, “They twined a radio cord around my neck, dragged me around and told me to eat crumbs from the floor.”

In one scene in the musical, Seong-tae visits Won-hee’s house and demands money. He takes a cord and ties it around Won-hee’s neck, dragging him around.

Tears glistened in the audience’s eyes when Won-hee cries out, “I just wanted to enjoy a regular school life like everybody else!”

However, unlike in real life, the musical portrays a scenario in which both the perpetrator and the victim find peace. A girl Seong-tae likes intervenes, pointing out his wrongdoings, and eventually he grows to regret his actions. Won-hee too eventually finds happiness.

Students in the audience groaned when the teacher came on stage to teach the students, cringed at the scenes where Won-hee was bullied and smiled when Seong-tae goes on a date with the girl he likes. The story was their story, one they could empathize with.

Kang Min-kyu, a 15-year-old student in his third year at Seonam Middle School, said the musical was “much more effective than receiving lectures on school violence prevention 10 times. It conveys the problems of school violence so well, and I was very moved.”

Kang Hye-ju, a manager at the Daegu Cultural Center for Students, said, “We were carefully deliberating effective methods to teach about school violence prevention when we thought about a musical.”

The musical was written by a local theater troupe Hanullim, who sought the insight of some 30 middle and high school students as they plotted out the story. The actors in the musical are in their 20s.

Over 6,400 people have watched the musical so far, which opened on April 4.

Daegu Metropolitan City education official Woo Dong-gi said, “The performance dates will be extended so that more students and parents can watch.” Other cities are planning productions of the musical as well.