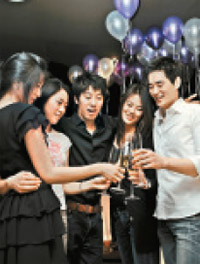 Saturday: Imperial Palace Seoul’s lounge bar Zoe will host a “Black Day” event this Saturday from 8 p.m. to 2 a.m. Black Day is an informal holiday for singles who did not have a date on either Valentine’s Day or White Day.

The event includes several match-making sessions, games for couples and much more. For winners of a sweepstakes, the hotel will provide a free one-night stay and a meal at the buffet restaurant Familia or some Moet & Chandon champagne.

Admission is 20,000 won, including two glasses of Zoe’s signature cocktails. 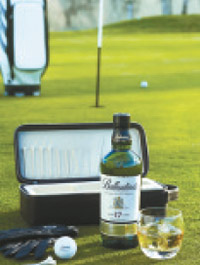 To April 29: Banyan Tree Club and Spa Seoul presents a package based on the 2012 Ballantine’s Championship. A deluxe suite is decorated with golf tournament pictures, trophies and golf putters. Guests are treated to breakfast for two, Ballantine golf limited edition golf caps, and two tickets to the 2012 Ballantine’s Championship. The package also includes 17-year-old Ballantine whisky, six golf shirts and various golf accessories. Moreover, there will be a lucky draw among guests who purchase the package for a chance to participate in a Pro-am, where a professional golfer plays with an amateur for a day.

To April 30: The Grand Hilton Seoul’s Japanese Restaurant, Mitsumomo, is offering a horse mackerel special. The horse mackerel, which is in season from April, is also known as aji, which means “very delicious” in Japanese. It is considered to be the ultimate fish for making sushi and sashimi in the spring. Guests will be served a special Aji vinegared dish and Aji vinegared sushi.

This offer is available only on weekdays from 11 a.m. to 5 p.m. Reservations for the spa treatment should be made three to four days in advance.

To May 31: Lotte Hotel Jeju’s Korean restaurant Mugunghwa offers menus prepared with Jeju’s bodeulgyeol beef, which means “tender meat” in Korean. Charcoal-grilled tenderloin, beef sirloin or braised beef ribs can be enjoyed on site. Guests choosing a bodeulgyeol beef menu will receive a scratch-off lottery card. Gifts worth a total of 1 million won are up for grabs.