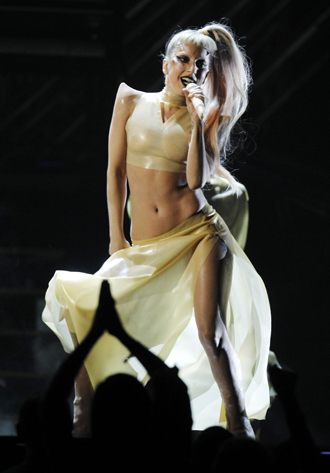 The biggest pop culture event of the year is bound to be Lady Gaga’s concert at Jamsil Olympic Stadium on April 27. When Hyundai Card, the sponsor of the concert, succeeded in getting the singer to kick off her “The Born This Way Ball” tour in Seoul, it was praised for putting Korea on the pop culture map.

Tickets sold out fast, with the singer’s teen fans leading the way.

Buoyant anticipation turned to disappointment and rage when the Korea Media Rating Board decided late last month that no one under the age of 18 could attend the concert - even accompanied by an adult. The board, which is responsible for setting age limits on films and performances in Korea, said Lady Gaga’s songs were too provocative, especially “Just Dance,” a song about clubbing and drinking that has an over-18 rating by the Gender Equality Ministry’s Commission on Youth Protection.

Christian groups, including the Korean Association of Church Communications, were already complaining that Lady Gaga encourages homosexuality and satanic beliefs through her songs. The Korean Association of Church Communications, which represents almost 40 major churches, sent a request to Hyundai Card last month asking the company to cancel the show, or at least forbid minors. 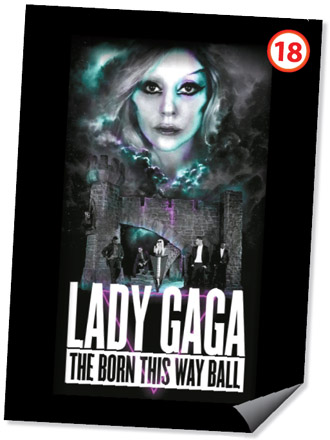 Hyundai Card and the promotion company, Live Nation Korea, had no choice but to refund the tickets bought by people under 18. Korea is the only country in Asia to have put an age ban on Lady Gaga’s tour.

The ban touched off a backlash by fans, teens and cultural critics, who say the authorities at the very least have underestimated the intelligence of Korea’s youth - and at the worst have made the country look stupid. They pointed out that Lady Gaga has performed in Korea before, in 2009, and then anyone over age 12 could go.

“This age ban is an atrociously backwards decision by the rating board,” said Bae Soon-tak, a music columnist. “Does the board really think this kind of ban will protect our children? By censoring this show, the board is implying that Korea’s youth aren’t smart enough to even make their own choice about seeing a pop concert.”

“There are far more provocative things on the Internet and TV that are open for teenagers to see,” said Kim Sang-min, a high school student whose friends were forced to get refunds for tickets they bought. “The government just doesn’t get it!”

Lady Gaga sent out a tweet earlier this month diplomatically protesting the decision.

“Thank u to all the adults in Korea who are speaking out for underaged who want to come to the BTW Ball,” she wrote. “Maybe the gov. will change their mind. Although not affecting ticket sales in Seoul, parents should be given more credit to determine what’s good for their children. I love my fans.”


Give us a reason

Critics of the ban say the government never really explained why youngsters should be shielded from Lady Gaga and her songs, and in fact, government explanations have been contradictory.

“If they had the nerve to change the age limit just one month before the concert, when the tickets were already all sold out, why can’t they do the decent thing and inform the public why?” said Choi Bo-kyeong, an enraged Lady Gaga fan. “It’s like they [the ministry and rating board] are trying to push blame onto each other, fearing the public’s reaction.”

Unlike for films, live performances by foreign artists in Korea have a more automatic age rating system. Concert promoters are required to submit a “recommendation report” to the rating board including the age limit they deem appropriate. The board gives final approval to the promoters, normally automatically.

For “The Born This Way Ball,” Live Nation Korea submitted their recommendation report on March 16 saying the show was appropriate for people over the age of 12, according to the rating board. The board said it notified the company of the change of the age limit to 18 on March 22.

The board said one song from the concert’s set list, “Just Dance,” was the main reason for the age ban.

“In July 2011, the Ministry of Gender Equality and Family added the song ‘Just Dance’ on their list of ‘harmful content for youth,’” Ahn Chee-wan, an official at the ratings board, told the Korea JoongAng Daily. “Along with this song, we also looked at several music videos by the artist and decided that the content was too provocative for children under 18.”

The ministry’s Commission on Youth Protection is in charge of reviewing songs by local and foreign artists and deciding age limits for them. “Just Dance” was banned for children under 18 last year because its lyrics mention “drinking and other provocative behavior,” according to the commission.

There are around 4,200 songs on the commission’s list that are banned for children under 18, including 35 Lady Gaga songs, although some are remixes of the same song. They include “Poker Face,” “Bad Romance,” “Alejandro” and “Love Game.”

Various local media reported that the key reason for the rating board age limit for the Lady Gaga concert was the age limit set by the ministry for “Just Dance.”

Soon afterwards, the ministry released a statement that read, “The Korea Media Rating Board’s claim that the age rating for the Lady Gaga concert in Seoul was changed because the song ‘Just Dance’ is one of the songs that our ministry named as content harmful for youth is not true.”

“We [the Gender Equality Ministry] have nothing to do with this decision by the rating board regarding the change in age limit for the Lady Gaga concert,” an official at the ministry told the Korea JoongAng Daily. “I don’t know why the board is involving us in this matter.”

Before the age ban on the Lady Gaga concert in Seoul, musicians Jay-Z, top, Marilyn Manson, middle, and 50 Cent were all given 18 and over age limits for their concerts in Seoul by the Korea Media Rating Board.[JoongAng Ilbo]

The ministry added that in similar cases, including Usher’s concert in 2010 and the Maroon 5 last May, the rating board approved the concerts for people over 12, despite the fact that both concert set lists included songs that were banned for teens under 18 years old.

Lady Gaga concert is the fourth foreign one to be banned for audiences under 18, following Marilyn Manson in 2005 and 50 Cent and Jay-Z in 2006.

“I have no idea what the rating board’s standards are for giving age bans,” added the ministry official.

Despite numerous local media reports connecting the age limit to anti-Lady Gaga protests by conservative Christian groups and other civic organizations, the board adamantly denies it.

“The protests against Lady Gaga, including the formal letter we got from the Korean Association of Church Communications, had no influence on our decision concerning the Lady Gaga concert,” said Ahn, of the rating board.

Sim Man-sup, the managing director of the Korean Association of Church Communications, told the Korea JoongAng Daily that he feels the group’s efforts were recognized by the government and he’s proud of that.

“I think Hyundai Card, as part of one of the biggest conglomerates in Korea, has the responsibility to not only think about their profits but contributing something good for society,” said Sim.

“This Lady Gaga concert they organized, we feel, was too commercially-driven,” he said, “without the organizer thinking of the damage it would do to our children.”

Local media estimates that less than 1 percent of the tickets were purchased for people under 18. Hyundai Card and Live Nation Korea both declined to comment.

A Hyundai Card official said reluctantly, “The only thing I could say is that we feel disappointed that this happened, as we feel that Korea is as open, if not more, than other Asian countries about pop culture.”

Although some public figures spoke out against the anti-Lady Gaga furor, there are a sizable number of Koreans who take the other side.

“In recent years, there have been issues raised regarding the provocative content of K-pop and idol groups as well as some sensational and ridiculous dramas on TV,” said pop culture critic Ha Jae-keun. “I think the age ban on the Lady Gaga concert is appropriate for Korea at this time. Korean pop culture is very different from American pop culture and we must not think that we can catch up to American trends so fast. We need to go at our own pace.”

“Even in Korea, after she performed in 2009,” he said, “there were civil protests in support of the gay community in Korea. Homosexuality is not a normal sexual orientation. Lady Gaga is helping to spread the culture surrounding homosexuals and making it an issue.”

Lee Jong-geol, general director of Korean Gay Men’s Human Rights Group Chingusai, felt so strongly about the controversy that he spoke to the Korea JoongAng Daily even though he says he never speaks to anybody associated with Korea’s big-three conservative dailies.

Lee says his group is suing the board for their age ban on the film “Chingusai” and are awaiting a Supreme Court decision.

“The real problem is that the rating board keeps giving vague justifications for their bans on culture content,” Lee said. “The failure to explain to the public their decisions just shows that they are not a well-functioning group and are not following the rapidly changing pace of the Korean public and its astute awareness of international cultural trends.”


I’ve had a little bit too much

Can’t find my drink or man

Where are my keys?

I lost my phone

What’s goin’ on, on the floor?

I love this record baby but I can’t see straight anymore keep it cool What’s the name of this club?

I can’t remember but its alright, a-alright

Wish I could shut my playboy mouth

How’d I turn my shirt inside out (inside out right)

Roses have thorns they say,

And we’re all getting’ hosed tonight!

What’s goin’ on, on the floor?

I love this record baby but I can’t see straight anymore keep it cool What’s the name of this club?

I can’t remember but its alright, a-alright

Can’t believe my eyes so many women without a flaw

And I ain’t gonna give it up, steady trying to pick it up like a call

Shorty I can see that you got so much energy

The way you twirlin’ up them hips round and round

Half psychotic sick hypnotic got my blueprint its symphonic

Half psychotic sick hypnotic got my blueprint electronic

Half psychotic sick hypnotic got my blueprint its symphonic

Half psychotic sick hypnotic got my blueprint electronic

Go! Your your muscle car-ve it out work it, hustle!

Don’t Slow! Drive it, clean it lysol, bleed it

Spend the last dough in your pocko!