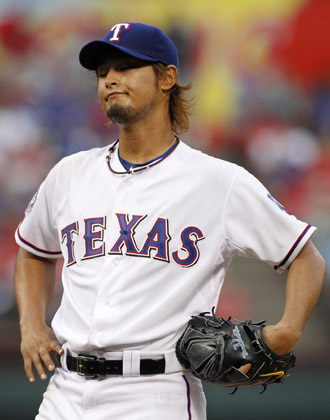 ARLINGTON, Texas - Ken Hirai has been a loyal fan of Yu Darvish since the pitching sensation was still in high school in Japan, following his career closely and watching his games on television.

On Monday, however, he got to see his idol in person at Texas Rangers Ballpark as Darvish made his Major League debut.

“I flew in from California just for this,” Hirai said. “I’m a great fan and I’m so excited to be here.”

Hirai was among the crowd of 42,300 to see Darvish’s debut on the mound for the Texas Rangers.

The excitement bubbled across the ballpark as fans, many sporting T-shirts and jerseys with Darvish’s number 11 on the back, arrived early to catch the 25-year-old pitcher warming up for the evening game.

After winning back-to-back American League Championships but twice falling short of a World Series victory, the Rangers bid more than $51 million for exclusive negotiating rights with Darvish, and then signed him to a $60 million, six-year contract.

Darvish darted out of the Rangers bullpen to cheers and a standing ovation.

Dozens of Japanese media members were also there to carry the game live and report on every detail of his performance.

“Just about everyone in Japan will be up at 5 a.m. to watch the game,” said Yuji Tsuji, a native of Japan and a New York resident. “In Japan, he was the No. 1 pitcher, so everyone wants to follow him and see him play in Texas.”

Darvish, who stands at 6 feet and 5 inches, had a 93-38 career record when he left Japan’s Hokkaido Nippon-Ham Fighters, and his arrival has created a buzz among long-time Rangers fans as well as among his Japanese admirers.

“I’ve been a fan of the Rangers since they were the Senators back in the ‘70s,” said Nedd Ross of Dallas. “Darvish adds another layer of excitement and anticipation to this team.”

Darvish’s debut did not quite measure up to the hype. He gave up four runs in the first inning and another in the second, but then found his range and picked up the win in the Rangers’11-5 victory over the Seattle Mariners. Reuters