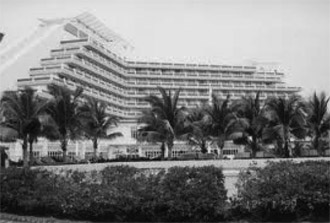 Yalong Bay in Hainan Island, southern China, boasts a beautiful beach that suits its nickname “Hawaii of the East.” The emerald green waters spread over the horizon, and the sands in the beach are sparkling white. Though there were only a couple of resorts on the island eight years ago, the deserted beach has turned into a popular vacation destination as resorts and hotels by global brands are constructed along the coastline.

The temperature reaches up to 27 degrees Celsius (80.6 degrees Fahrenheit) during the day, so you can spot many tourists sunbathing and swimming around the beach. Aside from during the coldest months in winter, the beach in Yalong Bay is crowded with foreign visitors every month of the year.

And yet, though the island is a tropical resort today, 60 years ago it was important for a different reason as the site of the last battle of the Chinese Civil War. In October 1949, the People’s Republic of China was proclaimed by the Communist Party, but southwest China and Hainan Island were still under the Kuomintang’s rule. In the spring of 1950, the Kuomintang put all of their remaining strength into the battle, as it could not let the last remaining stronghold go.

Today, the area is still important militarily. On the left side of Yalong Bay is Sanya Naval Base of the People’s Liberation Army, made up of two docking facilities and four piers. Navy insiders forecast that China’s new aircraft carrier will be placed at the Sanya Naval Base, which also possesses a strategic nuclear submarine equipped with ballistic missiles whose range includes the continental United States. Seventy kilometers (43.5 miles) northeast from Yalong Bay is the Lingshui Air Force Base. It attracted international attention when a U.S. Air Force reconnaissance aircraft made an emergency landing there.

The military strength of the area stands in stark contrast to the tourists there. Visitors enjoy the emerald ocean and deep blue sky of the island, but the People’s Liberation Army also utilizes it as a very strategic site for their military operations.

As China expands to the ocean, Korea is bound to be affected by the waves. An aircraft carrier based on Hainan Island could create waves near our Ieo Island.

We must pay close attention to the situation. I wonder if those who oppose the naval base for the sake of peace would consider the peace on Hainan Island to be less than genuine.

The author is the Beijing correspondent of the JoongAng Ilbo.