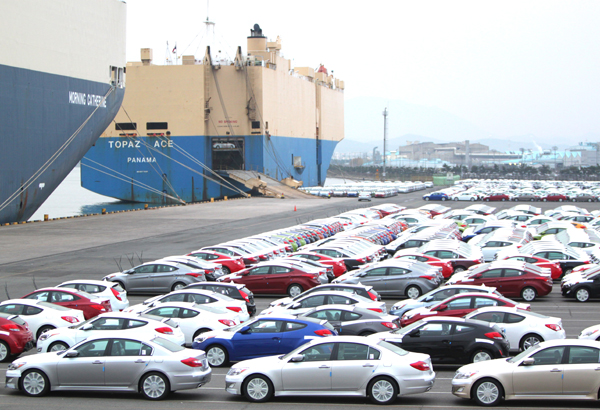 Hyundai Motor cars wait to be exported in a harbor in Ulsan. Hyundai and its affiliate Kia benefited most from the Korea-EU FTA, as its exports to the region increased considerably from a year ago in January and February. [JoongAng Ilbo]


Many of Korea’s top automakers have benefited significantly from the Korea-EU free trade agreement that took effect last July, with exports to the region jumping 230 percent on-year in January and February, government statistics show.

Hyundai Motor and its affiliate Kia Motors gained the most due to a series of launches of new vehicles in Europe, while GM Korea also fared well. 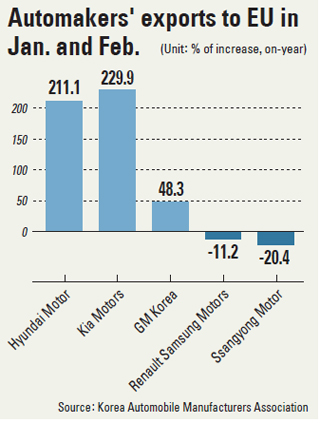 However, not everyone has taken advantage of the trade deal, as Renault Samsung Motors and Ssangyong Motor saw little or no difference in terms of exports.

According to the Korea Automobile Manufacturers Association, Hyundai, the country’s leading automaker, saw its exports to the EU jump 211.1 percent on-year to 9,196 in January and February. Kia’s performance was even more impressive, as it shipped 24,415 units, or 229.9 percent more cars than one year earlier.

“Hyundai released new cars including the new i30 hatchback and the i40 midsize wagon in Europe last year while Kia launched the new cee’d,” a Hyundai-Kia spokesman said, explaining their rising fortunes.

The impact of the FTA on bilateral trade can be summed up in terms of tariff cuts. Tariffs on Korean vehicles with 1.5-liter engines or larger will be completely wiped out within three years of the deal having taken effect, but cars with smaller displacements will have to wait a total of five years.

Hyundai makes the popular i30 at its plant in Nosovice, Czech Republic, but it also produces a large percentage of its i30s sold in the EU in Korea if demand is high. Its i40 sedans are produced entirely in Korea.

The cee’d is developed entirely for the European market. Kia manufactures the cee’d, the Sportage small sport utility vehicle and the Venga crossover vehicle at its plant in Zilina, Slovakia, but it also produces the Sportage and Venga in Korea.

Kia produces more than half of its cars sold in the EU in Korea. The Rio subcompact and the Picanto, a city car known as the Morning in Korea, are all made in Korea.

According to Hyundai Motor, both plants in the Czech Republic and Slovakia are running at full capacity due to high demand, forcing the two carmakers to produce some of the vehicles in Korea and export them to the EU. There are even months-long backlogs of orders for vehicles like the Sportage, it said.

And growing exports have seen the two automakers’ respective shares climb in the EU as they ride out the economic slump in the region. They recorded a combined market share of 5.8 percent in February, the highest figure since August 2011. Hyundai and Kia had a market share of 5.1 percent for the whole of last year.

The situation is still looking rosy for them despite an apparent on-year slump in exports last month, when they dropped to 27.5 percent. However, this is largely related to Kia’s exceptionally strong sales in March 2011, as the export figures for the last three months have remaining fairly consistent.

GM Korea has also taken advantage of the FTA through increased exports, even though ist deliveries to Europe have not increased as much. The local subsidiary of General Motors saw its exports climb 48.3 percent from one year earlier to stand at 40,840 units for January and February.

“Our exports to Europe have been increasing steadily,” said a GM Korea spokesman. “It is hard to single out one causal factor, but the FTA certainly played a role.”

GM Korea has been exporting its vehicles under the Chevrolet brand and added the Malibu midsize sedan to its lineup last year. Most of the Chevrolets sold in Europe are produced by GM Korea. They include the Spark city car, Cruze compact, Aveo subcompact hatchback, Orlando crossover van and Captive small SUV.

However, not all local automakers benefited from the Korea-EU FTA. Renault Samsung and Ssangyong saw their outbound shipments to the EU decline due to the prolonged economic slump there.

Renault Samsung exports its SM5 midsize sedan to Europe as the Latitude, and its QM5 small SUV as the Koleos. Ssangyong also sells its Korando C and Kyron SUVs in the continent.

Meanwhile, imported car sales have risen recently, with a record-high 10,648 sold in March.