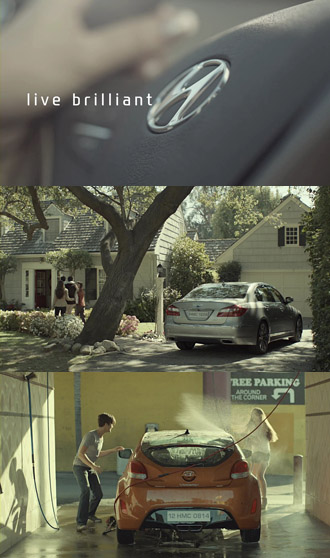 TV commercials for Hyundai Motor’s “Live Brilliant” campaign focus on self, love, friendship and family. Provided by the company

Hyundai Motor intends to emphasize its softer side in an attempt to appeal to consumers on a more emotional level rather than just stressing the mechanical quality and price-competitiveness of its vehicles, the automaker said in a press conference yesterday.

This marks a drastic departure from its previous marketing campaigns that emphasized value for money.

The new campaign by the country’s leading automaker promotes the Hyundai brand rather than individual models. The company recently started airing TV commercials in Korea with a new concept dubbed “Live Brilliant.”

The commercial does not discuss the quality of the cars or technology offered but rather tries to appeal to viewers by provoking old memories about family, love, friendship and self. Hyundai plans to release similar ads and commercials in other countries.

The targeted media include CNN, The Economist, and Monocle, as well as social networking sites such as Facebook and YouTube.

The company also plans to maximize the effect by releasing the ads during UEFA 2012 and the London Olympics.

The campaign was designed to create a stronger emotional tie with customers and foster greater loyalty, the carmaker said.

“Hyundai has become an important mass-market brand. However, our goal is not just to sell more cars but to become a global leader,” said Cho Nam-hong, a senior marketing executive at Hyundai. “We want to become a company loved by customers.”

This aligns with comments by Hyundai Motor Group Chairman Chung Mong-koo, who has recently been emphasizing qualitative rather than quantitative growth as the group, including Kia Motors, has already emerged as one of the world’s top five automakers by sales.

Cho said the company realized consumers appreciate the quality and reliability of Hyundai cars but do not feel much of a personal connection to the brand itself.

“Previous campaigns focused on hardware but the emotional connection with customers was week,” he said. “We didn’t have a chance to explain who we are. We wanted to communicate the message that we are a lifetime partner.”

He said China and India are producing quality cars at lower prices and “will become formidable threats in five to 10 years.”

“Hyundai cars are not much different from those made by Toyota in terms of quality. But we lag far behind in brand recognition,” he said.

The commercials are 30 or 60 seconds long and started airing in Korea on March 30.

Hyundai ranked No. 61 among 100 international brands chosen by Interbrand, a marketing research firm, last November. Its brand was deemed to be worth $6 billion.

The latest campaign targets a global audience rather than focusing on certain regions or markets and relates to the brand ethos “modern premium,” which the company came up with in January 2011, he added.