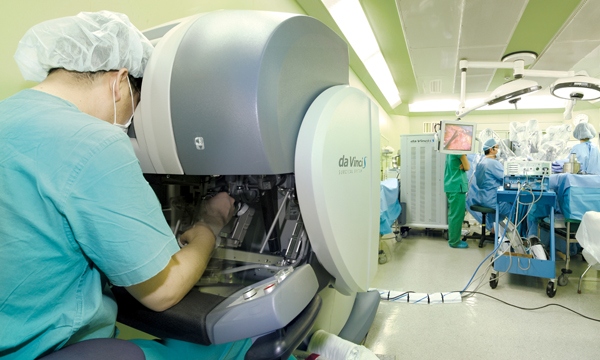 
The Ministry of Knowledge Economy said last month it will make Korean-made medical equipment more widely available at the major hospitals nationwide in a bid to support the domestic industry.

At present, the vast majority of high-tech medical equipment is imported, a trend likely to grow in the wake of recently signed free trade agreements with the EU and U.S.

From this year to 2016 the ministry will invest 40 billion won ($35 million won) to aid local companies that produce equipment such as medical diagnosis and treatment machines. As most of these are SMEs, the trade deals with major global trading blocs are seen as threats to many of the companies’ livelihoods.

Imported medical machines currently take up to 95 percent share of the local market, according to the ministry, despite the existence of over 1,700 small local companies that produce such tools.

When it comes to high-priced medical equipment, imports control 99 percent of the market, according to the National Cancer Center. Locals firms have mainly found a niche in X-ray readers and other small consumable supplies.

Local doctors say it is crucial to continue investing in local medical equipment for Korea to grow as a medical powerhouse. Meanwhile, the southern city of Busan is now focusing on branding itself as a hub for medical tourism in Asia.

“We not only need the best doctors, but also the highest-quality medical treatment machines to supplement doctor’s diagnoses,” said medical engineer Jo Young-ho of the National Cancer Center.

With the aging world population, medical machines are a potential driver of future exports for Korea, Jo added.

Korean-made medical equipment industry controlled around 1.7 percent of the global market in 2010 to rank 17th, while the United States and Germany were the world’s top two manufacturers that year, according to the Korea Evaluation Institute of Industrial Technology (KEIT).

According to experts, a lack of financing for SMEs is stymieing the domestic industry. Many companies are believed to have sufficient funds to invent the tools but not enough to update or market them as required by many practitioners.

This has created a vicious circle as the less reliant doctors are on Korean equipment the less credible it becomes.

“The manufacturing process for medical products may be even more complicated than that required to make semiconductors or cars because it is merges IT technology and involves a lot of fields,” said Heo Young, a project director at KEIT.

“However, local SMEs are not big enough to run the kind of preliminary tests needed to verify the safety of the machines. As such, large hospitals that are responsible for people’s safety and human lives around the clock refrain from using local products unless they are convinced they are the best available.”

At a forum last month organized by the Ministry of Knowledge Economy, eight major local hospitals including St. Mary’s Hospital and the National Cancer Center agreed to closely work with SMEs and provide feedback on their products. The aim was to help SMEs continue developing their products by giving them practical ideas on what to focus on next.

“The key here is that ultimately patients will benefit from the plan,” said Yoon Sang-jik, vice minister of knowledge economy.

“Well-known brands such as Siemens and GE Healthcare didn’t start as top medical products producers,” said medical engineer Jo of the National Cancer Center. “This is a platform for local companies to grow and make better equipment for patients.”

It is also an opportunity for local businesses to get better acquainted with doctors, how they make diagnoses and perform treatments, with the goal of making more useful products, Jo said.

But not all of the SMEs are trying to connect with large hospitals. Vatech, well-known for its dental products, targets small clinics because these are more lucrative, said Go Hyun-jung, a director at the company’s communications team.

As Samsung last year bought out local medical equipment company Medicine and made Samsung Medicine a subsidiary of Samsung Electronics, much attention is being paid to how the local market of medical machinery will change. The survival of pre-existing companies that make medical tools is also in question.

“Samsung aims to develop more high-performance equipment such as CT and MRI scanners, as well as machines that offer a range of services from diagnosing diseases to performing treatments,” said Lee Seung-jun, assistant director of Samsung Electronics’ communications team.

“As we don’t plan to mass-produce medical equipment that small companies usually focus on, there won’t be too much of a change to the local landscape,” he added.

The world’s biggest chipmaker said it is setting out to make prestigious products will have a positive knock-on effect of raising the overall credibility of the domestic industry both at home and abroad.

“If Samsung can create an international sensation with one of its products, as it did with its Galaxy smartphones, other companies have much to gain, especially in terms of going global,” said Heo Young.