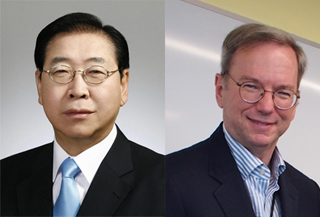 
Posco CEO Chung Joon-yang is scheduled to meet Eric Schmidt, the executive chairman of Google this weekend. According to sources, Chung left San Francisco in the United States yesterday to discuss with Google details on establishing a so-called “smart system” within Posco to track inventory and conduct simulations, among other purposes. The two are expected to talk about setting up a task force for the project and devise a road map for sharing their technological know-how this year.

The world’s third-largest steelmaker by output plans to build a virtual steel mill to run simulations before installing new equipment at its real plant using Google’s 3-D technology. It also aims to establish a smart logistics system based on the Google map technology to monitor inventories at its overseas plants and locations of cargo carriers in real time.