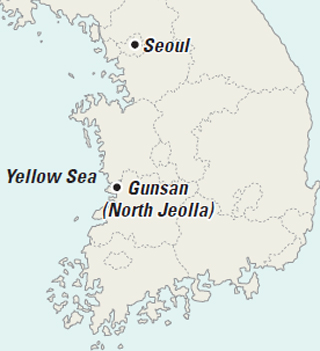 The Korea Coast Guard cracked down on an operation that exploited disabled people for labor along the coast of port city Gunsan in North Jeolla, last week.

When the Coast Guard’s investigation team entered a room in a Gunsan hotel on April 3, they discovered six frightened, mentally disabled people sitting on scattered blankets. They had been forced into labor for years, some for decades, by the innkeeper and his family, and had been kept in the room. In one corner of the room, the officers found 27 labor contracts.

The 47-year-old innkeeper surnamed Lee was arrested by the Coast Guard for exploiting some 100 disabled people. Ten other accomplices were captured as well.

Lee operated an inn located in downtown Gunsan, said the Coast Guard, and lured handicapped workers to the inn, promising, “We will provide meals and a place to sleep, and you will earn money.” 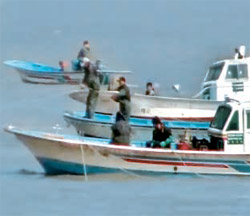 Instead, Lee forced these handicapped workers into labor on boats and fishing farms along the Jeolla coast concentrated in port cities Gunsan and Mokpo in North Jeolla. He then took their wages. He sold some workers to other sailors and fishermen off the Jeolla coast.

One of the disabled laborers found by the Coast Guard in the room was a 47-year-old man surnamed Eun. He has worked since the age of 19 but in 30 years has never received any pay. In May 2006, Eun became a crewman on a 5-ton fishing ship and received over 11 million won ($9,650) in wages, none of which went to him. Over the years, Lee swindled him out of 200 million won.

According to the Coast Guard’s investigation, Lee led the operation while his nephew was in charge of recruitment, his daughter in charge of supervising the enslaved workers and his brother, a taxi driver, in charge of transport. His sister oversaw prostitution of the disabled workers, and likewise collected a profit.

The victims of prostitution were mostly in their 40s, but according to a psychological test, their average mental age was 9 years old, said the Coast Guard. The slavery business was handed down in the family. Lee’s mother, surnamed Cha, had been involved in the exploitation of disabled workers since the 80s, and passed along the business with some 100 disabled laborers to be managed by her son in 1992. She died in 2007.

Lee and his family sold 70 of the 100 disabled laborers to fishing vessels based along the Jeolla coast for around 10 million won per person, the Coast Guard said. The remaining 30 worked on the coast and on the small islands off the coast of Gunsan. The Coast Guard estimates the Lee family has earned hundreds of millions of won from their slavery business over the years.

Lee also took from another 54-year-old disabled laborer some 19 million won he had received from the ship as well as health insurance after he was injured on duty on a fishing vessel.

A spokesman of the Coast Guard said, “Because the right of arraignment expired since the death of Cha [Lee’s mother], charges against Lee and the others’ need to be for crimes committed after 2007.”