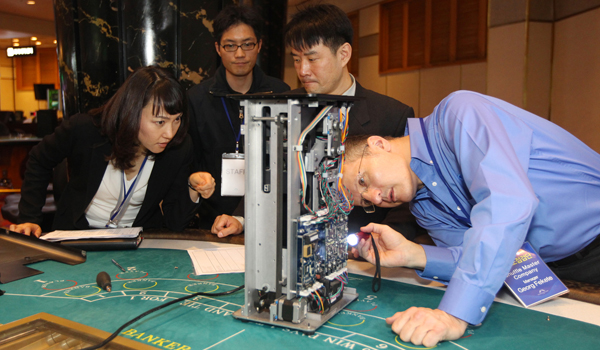 Experts yesterday examine the interior of the Kangwon Land Casino to find any bugging devices while the casino was closed for one day. [YONHAP]


JEONGSEON, Gangwon - The Kangwon Land Casino turned away gamblers yesterday to do a complete sweep of its premises to find bugging devices planted by two different underground gambling rings.

At 6:00 a.m. Tuesday, about 130 managers and workers of the casino hung signs informing gamblers of a 28-hour shutdown and blocked access to the gaming floor. They were joined by 39 inspectors from gaming table manufacturers and the police to examine 1,092 gambling tables, slot machines and card boxes to look for electronic devices. It was the first time that gambling had been halted since the casino opened in 2000.

Late last month, the casino discovered miniature cameras planted in card boxes and suspected an illegal gambling ring of planting them. The cameras recorded the cards that were dealt, even the ones placed face down on a gaming table, and a gang member viewing the images could remotely inform a member of the ring gambling at the table via wireless devices.

Jeongseon Precinct Police in Gangwon said the casino’s 41-year-old supply manager, who is surnamed Hwang, admitted to planting dozens of cameras since 2009. He was helped by another employee surnamed Kim, 34, police said.

The police have been tracking a 57-year-old suspect surnamed Lee who fled to China on April 5, whom they thought had organized the ring.

But last Friday, the Jeongseon Precinct Police said they had identified the leaders of a second ring while interrogating Hwang and identified 10 members including its two leaders surnamed Bae, 42, and Seok, 47.

That ring also used Hwang and Kim to plant cameras and sent 10 hired gamblers to baccarat tables on 22 different occasions from 2009 to last November. The police said Bae and Seok monitored the tables from a vehicle parked about 50 meters away from the casino and sent messages to their gamblers inside in code through wireless vibrating devices.