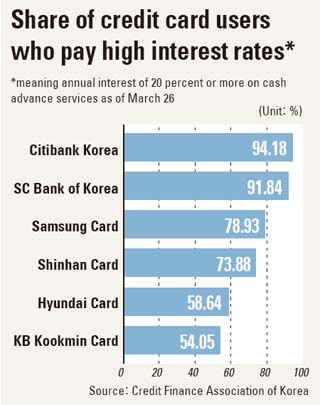 Foreign-owned commercial banks such as Citibank Korea and Standard Chartered Korea have taken flak for their high rates, which pundits claim stem from the banks’ moves to mine an underserved segment to overcome the limitations of their smaller branch networks.

Analysts also point out that with proper risk management, this strategy has a useful social value as citizens with adverse credit status but good chances of repaying their debts are redirected from the sky-high interest rates offered by nonbank lenders.

In late March, Kwon Hyouk-se, governor of the Financial Supervisory Service (FSS), revealed to reporters that the average annual lending rate for unsecured retail loans at Standard Chartered Korea and Citibank Korea stood at roughly 13 percent and 9 percent, respectively, as of January.

According to Kwon, this far outpaced the corresponding lending rates at domestic counterparts, which stood at 6 percent to 7 percent.

“Domestic commercial banks scaled back their approval of new loans as they followed [regulators’] measures to control household debt, but new loans increased at Standard Chartered Bank and Citibank Korea at twice the level seen as domestic banks,” he added.

The trend has attracted criticism from consumer advocacy groups and the media.

However, experts say the gap between the lending rates of domestic and foreign-affiliated banks can be attributed to the latter’s focus on lending to people with low credit ratings, which are higher-risk and call for more demanding interest rates.

“Most commercial banks can receive customers through their large branch networks, so they tend to only extend unsecured credit to people with high credit ratings from levels one to five, maybe six at a stretch,” he added. “But foreign-affiliated banks offer credit to people who would have trouble borrowing at other banks. They also rely on more loan agents.”

The tendency for their client base to skew towards citizens with low credit ratings is also reflected in the composition of their credit card users.

Of all credit card subscribers, the percentage paying annual interest of 20 percent or more on cash advance loans exceeded 90 percent for both Standard Chartered and Citibank as of March 26. This far outpaces the 54.05 percent at KB Kookmin Card, a bank-affiliated credit card firm.

Lee said this is because foreign-affiliated banks do not posses sprawling branch networks and do not have much latitude in terms of picking and choosing their customers, unlike their domestic counterparts.

As of the end of 2011, Standard Chartered Korea and Citibank Korea had 383 branches and 221 branches nationwide, respectively. They were dwarfed by domestic competitors such as Kookmin Bank and NH Bank, which had 1,165 and 1,172 branches.

Moreover, the foreign-affiliated lenders used between three to six times as many loan agents, or brokers that serve as a bridge to loan-seekers. According to FSS data, of 5,953 loan agents in the commercial banking sector at the end of last year, 3,059 worked for the two foreign-affiliated banks.

Officials at the latter say they manage the higher risk by focusing on customers with a greater probability of making good on their debt, such as faithfully conducted financial transactions for a certain period of time.

People may say the lending rates are high, but “other sectors such as savings banks charge 30 percent or more to the same customers,” said Lee of the FSS.