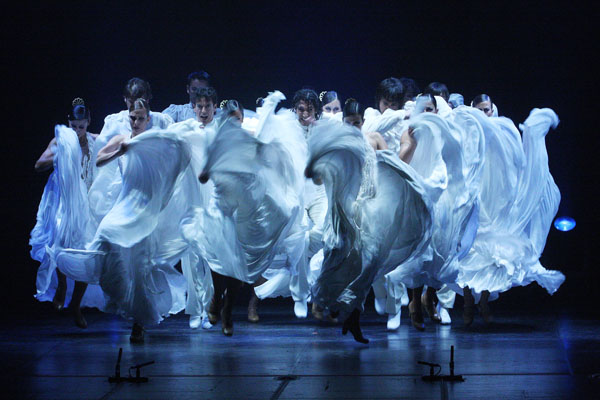 Carmen Mota, Spanish dancer and choreographer, returns to Korea with her troupe to stage a Flamenco dance musical at LG Arts Center in southern Seoul. See, THEATER, below. Provided by the organizer

To April 24: The Seoul Arts Center presents its 24th annual Orchestra Festival in commemoration of the opening of the concert hall in 1989. The Gangnam Symphony Orchestra, Ewha Womans University Orchestra, and Unpa Memorial Orchestra are just three of the ensembles from across the nation set to perform during the 24-day festival. Pianist Kim Dae-jin, and the 14th International Tchaikovsky Competition winner soprano Seo Sun-young and many other notable artists will be performing solo recitals as well. The festival will wrap up with a performance by the Unpa Memorial Orchestra, which was formed in memory of Im Won-sik (1919-2002), one the fathers of Korean symphony orchestras.

June 15: I Musici, the Italian chamber orchestra, celebrates its 60th anniversary. It was formed in 1952 by 12 musicians who graduated from notable Italian music school Santa Cecilia Conservatory of Music. The group is well known for its interpretations of Baroque, Antonio Vivaldi and Tomaso Albinoni. The interpretation of Vivaldi’s “Four Seasons” is especially loved by many, and the group has recorded six versions. I Musici’s leader Antonio Anselmi will play “Four Seasons” solo and the orchestra will play Ennio Morricone’s “Morricone Suite.” Guitarist Kim Seh-hwang of rock group N.EX.T will also perform with the chamber orchestra.

Tomorrow to Saturday: The theater company She She Pop from Germany will hold its first performance in Seoul with its play “Testament,” which is based on Shakespeare’s “King Lear.” The play explores an inconvenient truth behind generational conflicts related to the aging of society, caring for the elderly, and inheritance issues. The actors’ fathers appear on stage, adding a dose of reality to the candid and bare creation.

The performance starts at 8 p.m. tomorrow and at 3 p.m. on Saturday.

Tomorrow to Sunday: A story of Spartacus, former gladiator and military leader of the Third Servile War, will be performed by the Korea National Ballet under Yuri Grigorovich’s instruction. Grigorovich is a Russian dancer and choreographer who dominated Russian ballet for 33 years.

April 19 to 29: Shakespeare’s “Hamlet,” the playwright’s longest play, will be performed by Theater Gabyun for 10 days. In recreating the Shakespearian masterpiece, director Lee Seoung-gu purposely chose actors of widely differing ages - from eight years old to 58 years old - to highlight the contrast in various scenes. Hamlet will be played by Kim Dong-hyun, who has also appeared in “Sea Without Water” (2009), “Proof” (2010) and “Happiness” (2011-12). In a turmoil of conspiracy and authority, Hamlet struggles to find his way, and the audience may relate their lives to the themes of the timeless classic.

To April 22: Lee Cheong-jun’s book “Seopyonje,” which was later adapted to a film of the same name, has been made into a musical with a star-studded cast. Like the film, the musical tells the story of a girl who has devoted her life to pansori, or narrative singing. Director Lee Ji-na stages the production with help from Yoon Il-sang, who is well known for composing some of the greatest K-pop hits of the 1990s, including songs for Turbo, DJ Doc, Cool, Kim Bum-soo and Kim Gun-mo. The performance features Lee Young-mi, who has starred in numerous musicals, including “Jekyll and Hyde” and “Hedwig.”

Oak Joo-hyun, who has appeared in several musicals including “Aida,” “Chicago,” and “Cats,” performs in the title role.

Performances start at 8 p.m. from Tuesdays to Fridays and at 2 p.m. and 6 p.m. on Saturdays and Sundays.

May 15 to 26: Based on the life of notable singer Bae Ho during the 1960s and ‘70s, the production hopes to bridge the gap between the younger and older generations by connecting audiences through music.

The musical is directed by Kim Seo-ryong, who has directed concerts for K-pop stars like Rain, 2PM, and Park Jin-young.

May 23 to 26: Spanish dancer and choreographer Carmen Mota returns to Korea with her troupe to stage the Flamenco dance musical “Alma de Fuego” (“Soul of Fire”). More than 30 years ago, Mota created the choreographic masterpiece that mingles the core strength of Spanish dance with contemporary tones, and with that performance, she has built the success of the troupe. The concert starts at 8 p.m. on Wednesday and Thursday; at 4 p.m. and 8 p.m. on Friday; and at 3 p.m. and 7 p.m. on Saturday.

To June 27: The word “jami” means “good food with a lot of nutrition” as well as “fun” in the dialect of Jeju Island, the country’s southernmost island. Admission to the show also includes a fare of Korean dishes and traditional tea. Performances are on Mondays, Tuesdays, and Wednesdays at noon.