2PM and 2AM touch down in Japan for movie promotion

2PM and 2AM touch down in Japan for movie promotion 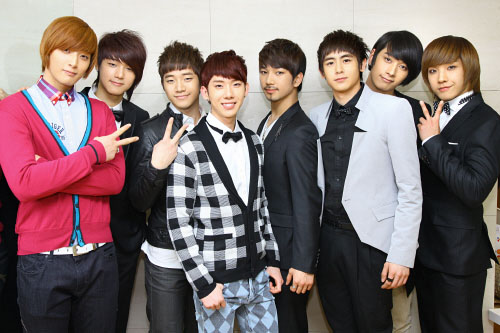 Boy bands 2PM and 2AM touched down at Haneda Airport in Tokyo on April 10 to a throng of 1,500 Japanese fans who had camped out overnight to see the bands.

The boy bands were in Japan to promote their collaborative documentary movie “Beyond the One Day -- Story of 2PM and 2AM.”

2PM’s Taecyeon took time at the airport to thank the screaming fans. “Thanks for coming out to see us. We are here for the movie that you’ve been waiting for,” he said.

The part documentary, part film starring the two groups was directed by Japanese director Shoichi Omichi and will open in cinemas on June 30 in Japan.

The movie is based on the inspirational true story of the boy band members who made it through the vicious audition cycle to eventually become K-pop icons.

Backstage moments from the “JYP Nation in Japan 2011” concert as well as candid never-before-seen interviews with band members are included in the film.

“We spent a lot of time with 2AM as trainees, but now because of our schedule we don’t get to hang out as much. Thus, it was such a privilege to get to film together with our friends who we’ve spent a good six years training with,” said 2PM.