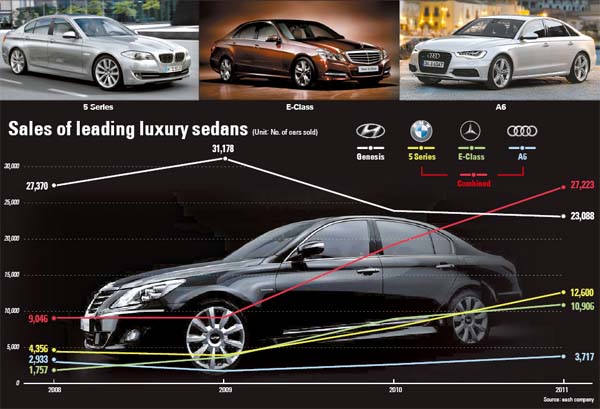 Hyundai Motor has been offering a 1 million won ($877) discount on its Genesis luxury sedan from this month in response to sinking sales of the luxury sedan. The Genesis, once the nation’s leading high-end sedan, is facing tough competition as the aging model gives way to both domestic and imported vehicles.

In 2008, Hyundai proudly introduced the sedan as a formidable competitor to imported cars such as the BMW 5 Series or Mercedes-Benz E-Class. After four years, however, its plunging sales show that its luck may have run out.

In March, the Genesis sold 1,560 units, falling 47.4 percent from a year ago. From January through March, its sales declined 11.8 percent from the corresponding period last year to stand at 4,667 cars.

In contrast, similarly-priced rivals have fared well, seemingly benefiting at the Genesis’ expense.

From January to March, sales of the BMW 5 Series increased 7.4 percent from a year earlier to 3,546 units. In the same period, the Mercedes-Benz E-Class sold 2,152 units, while a total of 1,343 Audi A6 sedans were delivered in the same month. In total, the three most popular imported sedans in the segment sold 7,041 units.

“The Genesis is losing competition to foreign rivals and this is one factor that has contributed to its poor sales,” said one local analyst, who declined to be named.

Other factors include the model’s age, a turn-off for consumers in the face of so many new launches from importers. BMW’s 5 Series was launched in Korea in 2010 and the A6 hit the market last year.

The success of the 5 Series is largely down to what industry figures call “downsizing,” as the German automaker introduced a smaller engine and a more competitive price. The 520d, a more fuel-efficient 2-liter diesel, became an instant hit in Korea after it was released last year. It was also the best-selling foreign car here for the first three months of the year, helped by its 61.5 million won price tag, the lowest among all 5 Series sedans sold in the country. Many dealers add another sweetener by offering discounts of up to 10 percent.

Another popular 5 Series sedan, the 528i, was released last year and became the third best-selling foreign car this year through March. It is equipped with a 2-liter, 4-cylinder gasoline engine, whereas the previous generation of the same model boasted a 3-liter, 6-cylinder engine.

However, BMW was able to maintain the same horsepower despite the smaller engine by drawing on its TwinPower turbo technology. At the same time, it improved fuel efficiency by 22 percent and lowered the price tag by more than 5 percent to 67.9 million won.

However, the Genesis, which retails from 42.1 million won, made what now looks like the mistake of going in the other direction.

To compete with foreign luxury cars, Hyundai equipped it with more options, even introducing the limited-edition Genesis Prada in May 2011. This came equipped with a 5-liter engine and a price tag of 77.1 million won, 14.2 million won more than its most expensive predecessor. Considering that Hyundai dealers normally refuse to give discounts, the vehicle was more expensive than lower-end 5 Series models such as the 520d. Hyundai said upon the Prada’s release that it was targeting total sales of 1,300 units, but as of now it has only managed to shift around 300.

“Not many consumers are willing to pay an extra 14.2 million won just because it has a bigger engine,” said an auto industry official.

“The Genesis is often compared to the 5 Series because it is in a similar price range, but the Genesis has a bigger engine and is larger in size. It actually belongs in a different segment,” said a spokesman for the automaker.

He said the Genesis has more standard options than foreign rivals of a similar price, making it more competitive.

Another reason for the Genesis’ poor sales is the arrival of new competitors from local brands, even as close to home as Hyundai affiliate Kia Motors. Kia plans to launch the K9, its flagship luxury sedan, on May 2, and analysts say many potential Genesis buyers are waiting instead to get their hands on one of these.

The K9 boasts numerous technologies not yet featured in domestic vehicles and is more stylish than many of its rivals here, spelling more bad news for the Genesis after it is released.

“The K9 is definitely going to eat into the market share of the Genesis and Equus,” said Kim Pil-soo, a professor at Daelim University College.

Sluggish domestic car sales have also impacted the Genesis, framed against a general trend of increasing interest in imports.