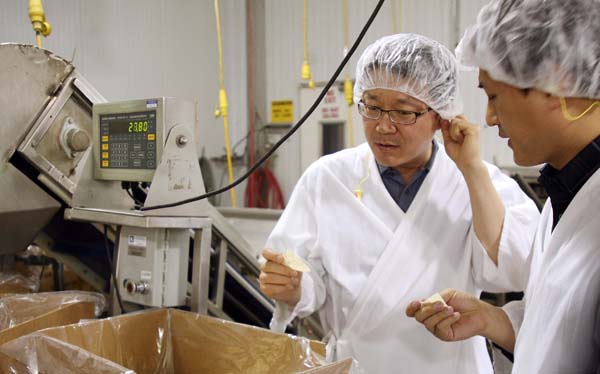 Workers at E-mart, the nation’s leading discount store, inspect corn powder, the main ingredient in corn chips, at a lab of Tyson Foods, an American food processor and distributor. By Chang Chung-hoon

PATTONVILLE, Arkansas - Competition between Korea’s large discount stores is growing as they try to lower prices by procuring raw materials from around the world on behalf of their suppliers.

In an attempt to keep consumers happy, product buyers at large retail stores are traveling to countries like China, India and Vietnam to find quality goods that are not sold in local markets yet. Now they even import raw materials on behalf of local manufacturers to offer better prices than their rivals.

E-mart, which racked up domestic sales of 13 trillion won ($12 billion) last year, is trying to import corn powder directly from the United States as part of its effort to gain price competitiveness. 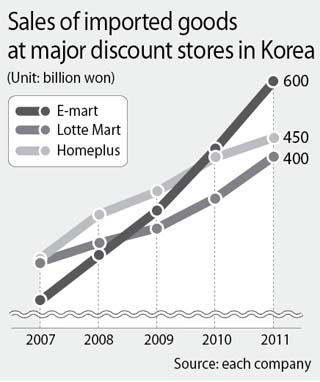 E-mart said it plans to buy 35 tons of corn powder and then outsource it to Cheongwoo Confectionery, a small local company, to make nacho chips and other snacks.

“Cheongwoo could import the ingredients by itself, but E-mart decided to do so on its behalf because Cheongwoo can’t really buy enough [to lower the manufacturing price,]” said Kim Sang-beom, director of E-mart’s processed food team.

The discount store is set to sell the corn snacks produced through Cheongwoo at half the price of other imported corn snacks. This is possible because the logistics cost of importing the complete product is unusually high for corn snacks, due to the foodstuff’s relatively short expiration period of six months. Usually, distribution costs account for 50 percent of the retail price of corn snacks.

E-mart is not alone in trying to import raw materials to lower its retail prices.

Lotte Mart cut the price of an 800 gram bag of Californian almonds by 25 percent to 10,000 won last month. It was able to do this because it started importing raw almonds in September and had Korea’s Doosung F&C roast the nuts and wrap them. Since the nuts were released on March 22, almost 100,000 bags have been sold, according to Lotte Mart.

“Because we got the raw materials directly from overseas, we were not only able to cut the price but also secure a unique product,” said Park Byung-gyu of Lotte Mart.

In the last several years, large discount stores have increasingly been looking overseas to ramp up their profits. Prior to that, they focused on producing their own private brand (PB) labels to give their respective businesses more momentum.

Their PB products ranged from fresh food to home appliances and electronic devices such as TVs. As they assumed an active role in planning, developing and manufacturing these products, the stores became able to cut their retail prices by up to 30 percent.

However, this avenue soon hit a barrier as PBs came to account for one-quarter of their total items and there were few new products they could realistically count on.

Flying out local buyers to make a purchase overseas usually cuts production costs by a minimum of 15 percent of as there is no middle man taking a commission, the retailers claim.

Also, as buyers scout hidden gems on foreign shores and products that have yet to be introduced in Korea, discount stores gain another advantage over rivals by offering uniqueness.

As such, discount companies are expanding their global sourcing teams.

E-mart has divided its team into five divisions - fresh foods, processed foods, lifestyle, electronics and fashion products - and is now running branch offices in China, Vietnam and the United States to expedite the process for the purchase deals.

Homeplus also reorganized its overseas outsourcing team based on product categories, as did Lotte Mart.

Now that these large discount stores have seen the sales grow of those products using directly-imported ingredients, they are now looking further afield, beyond China, India and Vietnam, which are relatively cheap and local, to farms and factories in the United States, Australia and France.