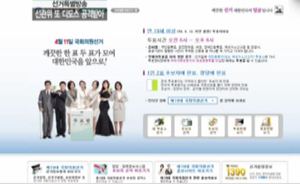 The home page of the National Election Commission suffered yet another cyberattack on the eve of the general elections, prompting a police investigation.

The National Election Commission said yesterday morning that two distributed denial of service (DDoS) attacks took place on Tuesday night. The first attack began at 10:27 p.m. and lasted for about 34 minutes, and the second attack took place for about 18 minutes starting at 11:02 p.m., the election watchdog said.

The second cyberattack also targeted not only the commission’s Web site but also the special service site “Find my polling station” for yesterday’s legislative election. According to the election commission, the service was interrupted for about three minutes, but was normalized quickly.

The commission immediately reported the cases to the police and informed the Korea Internet Security Agency and National Cyber Security Center about the situation. After receiving the report, the Cyber Terror Response Center of the National Police Agency dispatched an investigator to the computer center of the commission early yesterday morning.

Shin Wu-yong, the chief public affairs official of the National Election Commission, told CBS radio yesterday morning that the service was able to normalize quickly because the commission has beefed up security measures against cyberattacks after last year’s incident.

A cyberattack rendered the commission’s Web site inaccessible for more than two hours on the day of the Oct. 27 by-elections, preventing numerous citizens from finding their polling locations online.

“Last year, we only provided the polling station location service on our Web site,” Shin said. “But this time, we provided the service jointly with major portal sites Naver and Daum.”

He also said the commission has built a “cyber shelter” against the attacks to improve the defense mechanism. “We are confident that our Web site will remain undisturbed even against more severe attacks,” he said.

The police said it will analyze the log-in records and IP addresses to find the source of the attacks as soon as possible.

“We will closely monitor the situation until the voting deadline because there is a possibility of an additional attack,” said a police official.

Although the latest attacks on the commission had little impact on voters, the political ramification will inevitably be huge once the police find the culprits.