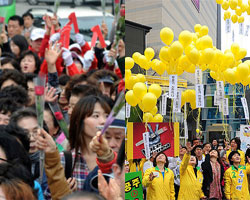 Rival parties are believed to be so close in Wednesday's South Korean parliamentary elections that it is extremely difficult to tell which party will be victorious, exit polls said.

An exit poll by South Korea's public broadcaster KBS predicted that the ruling Saenuri Party and the main opposition Democratic United Party will both win between 131-147 seats out of the total 300 seats up for grabs.