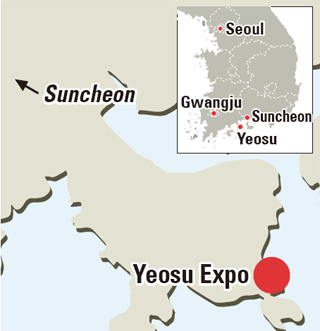 Another attraction at the Yeosu Expo will be the corporate pavilions to be operated by seven of the largest Korean companies.

With a large monetary injection, known to be 15 billion won ($13.2 million) to 20 billion won for each pavilion, the companies are putting the final touches on what will be a combination of state-of-the-art technology and vision.

SK Telecom, the country’s leading mobile operator, told the Korea JoongAng Daily that the first floor of its three-story pavilion will provide visitors with examples of technology to be used more frequently in the future.

The second floor will exhibit media artwork embodying telecommunication technology, while the third floor will screen a music video on a relevant subject as well as movies filmed with smart phones by SK employees, the company said.

The underlying theme, the company said, is “weCloud,” a play on Apple’s popular iCloud technology.

“Technology development over the past years has brought about a loss of humanity, but we will suggest a future where technology brings human participation and sharing,” said Park Kyu-hyun, a manager of SK Telecom.

Themed with “Green Refresh,” LG Pavilion is focusing on introducing its green technologies.

On the ground floor level of the LG Pavilion will be the “Media Chandelier” and “Water Screen,” which will feature environmentally friendly technology such as light-emitting diodes and 3-D technology, an official of the company said.

Solar panels will be set up on the roof and technology using smart grids will also be featured, the official said.

“?‘Life is green’ is our motto here, and we will paint a future where our green technology is designed for customers,” he said.

The Hyundai Motor Pavilion centers on the theme of “Beyond Mobility,” and there will be no direct exhibition of individual futuristic cars by the auto giant at the expo, said Kang Jin-hyuk, group account director. The group instead will try to show how it will respond to environmental challenges such as global warming.

“It will be an interactive, comprehensive experience for our lives,” Kang said.

Entertainment is another key to the experiences at the Hyundai Motor Pavilion. The company said it will put on the “Big 5 Concert” at the Big-O performance stage on the day of its pavilion at the expo, which falls on May 25.

Samsung Pavilion, led by Samsung Electronics and Samsung Heavy Industries, plans to feature exhibitions on the theme of creative coexistence of human kind.

GS Caltex said it will grace its pavilion with the theme “Energy Field Never Ending Movement,” while Posco Pavilion is to introduce the company’s ocean businesses including sustainable development of marine resources. Lotte Pavilion is to offer a “World Full of Pleasure,” the company said.

The companies say they count on the Yeosu Expo as an opportunity to improve public awareness as in the previous expo in China in 2010.

A survey by the Korea International Trade Association conducted after the Shanghai Expo closed in October 2010 showed improvement in the brand image of Korean companies among Chinese consumers.

“By participating in a national event and setting up our own pavilion, we expect Samsung’s brand and image will be able to improve,” said an official of the Samsung Group, referring to the Yeosu Expo.

Lee Joon-hyung, a manager of the Organizing Committee for the Expo 2012 Yeosu Korea, said the seven corporate pavilions will paint a picture of what will become a reality in near decades.

“The future of a computer-based society suggested at the Daejeon Expo in 1993 is now a reality,” Lee said.

“I think some other prophetic visions will be made for the future during the Yeosu Expo.”