Farrelly brothers set out to recreate the Three Stooges

Farrelly brothers set out to recreate the Three Stooges 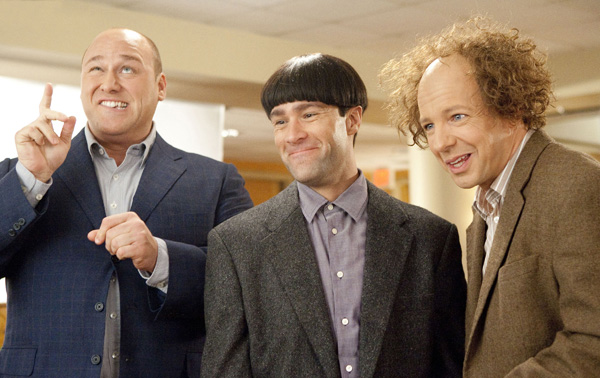 From left, Will Sasso, Chris Diamantopoulos and Sean Hayes in a scene from “The Three Stooges.” [AP/YONHAP]


LOS ANGELES - Resurrect Curly, Larry and Moe? As any Three Stooges fan might say, that’s “soitenly” sacrilege. Casting new actors as the knuckleheads who specialize in slapping one another around and braining themselves with hammers would be like trying to redo the Marx brothers or Laurel and Hardy, right?

Yet the idea has been with Peter and Bobby Farrelly for 16 years, since not long after their early success with “Dumb and Dumber,” and they wrote their first Stooges script after they really hit it big with “There’s Something About Mary.”

Stooges fans have scoffed at the idea and even cursed the Farrellys for tinkering with their slapstick idols, fearing the brothers would give the Stooges an R-rated, gross-out makeover in line with their hit comedies.

The thing is, the Farrellys never wanted to tinker with the Stooges, whom they’ve adored all their lives. They wanted to bring them back on screen as closely as possible to the nyuk-nyukking Stooges of the classic shorts from the 1930s to ’50s. The Farrellys’ PG-rated “The Three Stooges” has the look, the voices, the sound effects and the maniacally-paced cartoon violence that the filmmakers loved growing up.

“There were a lot of people who were like, ‘The Farrellys are going to ruin it. The Stooges are not the Farrellys.’ And we knew that,’’ Peter Farrelly said. “This isn’t ‘Something About Mary.’ This is the Stooges, and we didn’t want to thrust our sensibilities on the Stooges. We wanted to adjust to their sensibilities.

“What’s sacrilegious to us is that so many kids today don’t know the Stooges, and they’re our favorite of all time. We love the Stooges, so we made this movie because of our love for The Three Stooges. We want to bring it back. We want their legacy to last.’’

There was a time in the movie’s long gestation period that the casting alone could have messed with the Stooges’ legacy. Distributor 20th Century Fox initially wanted big names, and at one point, the movie reportedly was moving ahead with Jim Carrey as Curly, Sean Penn as Larry and Benicio del Toro as Moe.

Farrelly said he and his brother even met with such heavyweights as Mel Gibson and Russell Crowe as potential Stooges, but the problem with many superstars is that they wanted to do interpretations of Curly, Larry and Moe rather than recreate the characters as is.

So, the Farrellys cut a deal. They waived their usual salary in exchange for a cut of profits if the movie sells well and the chance to cast whichever actors were right for the parts, known or unknown. After auditioning “over a thousand people, these were the three guys who were by far the best.”

Sean Hayes (Larry) is the best known, having co-starred as the caustic Jack McFarland on “Will & Grace.” Will Sasso (Curly) spent five seasons on the sketch comedy series “MADtv.” Chris Diamantopoulos (Moe) was utterly unknown to the Farrellys but is a Broadway veteran of such shows as “The Full Monty” and “Les Miserables,” played Frank Sinatra in the TV mini-series “The Kennedys” and had recurring roles in such shows as “24” and “The Starter Wife.”

“Pete and Bobby were really smart in that they had people come in who wanted to do the part, and they weren’t going to cast somebody just because of their name,’’ Hayes said.

Though their film is set in our times, the Farrellys came up with a backstory to unleash the socially inappropriate Stooges on today’s world. Abandoned as babies, Curly, Larry and Moe grow up in an orphanage, in seclusion and ignorant of the ways of the world, raised by nuns including the cruel Sister Mary-Mengele (Larry David of “Curb Your Enthusiasm,” who’s essentially the Stooges’ mean and nasty surrogate grandmother).

The Stooges have to venture into the world to make money to save the orphanage. Without giving too much away, they get to bring the Stooges’ treatment to some very familiar faces on reality television. AP