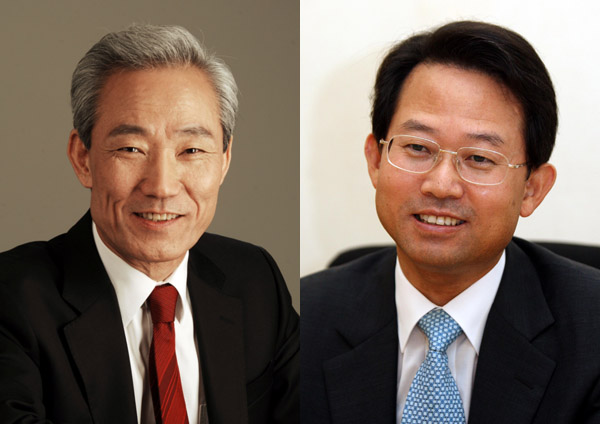 
In the aftermath of Wednesday’s general elections, all eyes in Korea’s business world are on the 20-odd winning candidates who come from business and economic backgrounds, including former high-ranking officials in government agencies, scholars and CEOs.

Despite the fact that a number of economic issues received top billing among the policies proposed in the run-up to the election - boosting welfare programs being a case in point - the number of elected candidates drawn from the business sphere remained similar to the last general election’s.

This week, they mostly came from the ruling Saenuri Party, with notable winners including Kim Jong-hoon, the former trade minister who spearheaded negotiations for the nation’s recent free trade pacts such as the Korea-U.S. FTA.

By beating Chung Dong-young of the Democratic United Party in Seoul’s Gangnam B District, Kim is slated to join the ranks of legislators that he once worked hard to convince in the process of ratifying the trade pacts.

Yoo Sung-kull, a former vice finance minister under the current Lee Myung-bak administration, won a seat by a comfortable margin in Daegu’s Dong A District.

With his extensive experience with managing government finances, it remains to be seen what role Yoo will play in the current political environment amid myriad pledges to expand welfare programs. The Ministry of Strategy and Finance has said many of these cannot realistically be paid for without increasing taxes or other revenue sources.

Park Dae-dong, the former CEO of Korea Deposit Insurance, won a seat in Ulsan’s Buk District and is expected to utilize his financial expertise in legislation, while Kim Hee-kuk, a former vice minister of the Ministry of Land, Transport and Maritime Affairs, secured a seat in Daegu’s Jung-nam District. Kim also helped lay the groundwork for President Lee’s four-river restoration project.

Among a number of scholars voted into power, Kang Seog-hoon, a professor of economics at Sungshin Women’s University and a close confidant of Saenuri’s presidential frontrunner Park Geun-hye, landed a seat in Seoul’s Seocho B District.