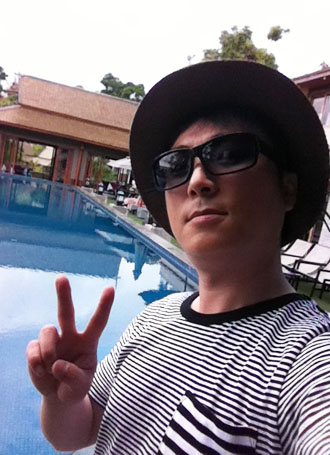 Woo Seung-min from the All Lies Band has assured fans and friends via Twitter, public concern over the singer’s safety while honeymooning in Thailand’s Phukhet.

On April 12, Woo tweeted, “Thanks for all your concerns, but where I’m at in Phuket, the tsunami warning has been lifted. The airport will reopen from 7 a.m. and we are set to return tomorrow. I pray that the more than 2,000 honeymooners in the surrounding area will be okay.”

Straight after an 8.6 magnitude earthquake struck off Indonesia on April 11 and raised fears of a tsunami in the coastal regions of surrounding nations, Woo was quick to tweet that he was in the danger zone with his new wife.

“There’s been an earthquake near Bali in Indonesia and a warning has been issued here in Phukhet. The airport is closed. To those who are near beaches, please seek refuge away from the water. You should also call your family back home and let them know you are okay,” twitter Woo on the day of the incident.

On April 8, the 36-year old singer tied the knot with a woman four years his junior. The pair met in fall and got married after a short courting period. The event was hosted by comedian Yoo Jae-seok and attended by throngs of celebrities.