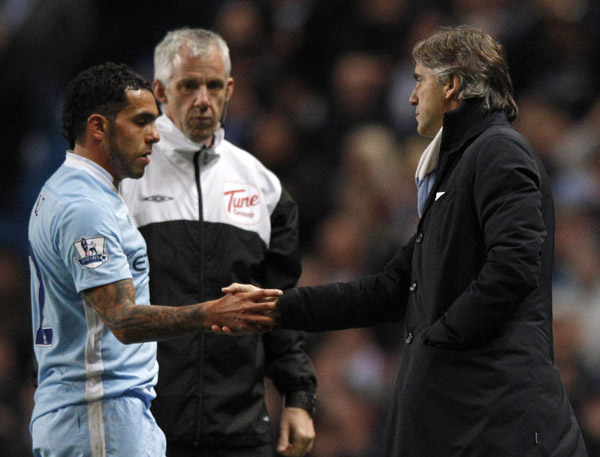 In a bizarre post-match press conference, following City’s emphatic 4-0 victory over West Bromwich at Eastlands which brought his team to within five points of the leaders with five games remaining, Mancini refused to accept that his club can overhaul the defending champions.

“United is a fantastic team and I don’t think they can lose five points,” said Mancini. “For us it’s important we finish this season well. For us, it has been the best season since 1968, for us that’s important. Always I will fight, every day. Also my team, but now I think it’s too late. It’s not mind games. United have a fantastic spirit, we don’t have the same spirit. For this reason, it’s very difficult.

“I spoke with my players before the game and said it’s important we finish this season well because it is the best season since ‘68 when Manchester City won the championship. We need to do our best until the end. It’s important we play very well like we did for 28 games.”

Mancini challenged his side to complete home and away victories over United when the two Manchester rivals collide at Eastlands on April 30.

“For us it’s also important to beat United here so we have beaten them two times this season. The guys will do their best because we are professional. We had a good season, we want to finish well,” he said.

City won easily against Albion, with two goals from Sergio Aguero, one from David Silva and a first goal of the campaign from Carlos Tevez, who started his first game for the club since September.

The Blues also looked vastly improved without the distraction provided by Mario Balotelli, who was serving the first of a three-match suspension following his red card at Arsenal on Sunday, although Mancini insisted that he will throw him straight back into the fray when his ban is complete.

“I’m pleased with all the players,” he said. “It was important to come back to play like one month ago, to score four goals. I’m happy for Carlos because he scored one but he is not ready maybe for 90 minutes. It’s difficult. He scored, I’m happy for Aguero who scored another two goals. And it’s important Mario got only three games. I thought he would get six or seven games. And if Carlos continues to play, he can improve his performances for us.

“I thought in the dressing room [on Sunday] Mario would take a six- or seven-game ban, so yes, he will play when he is available. He will be ready for Man United!”

Tevez’s performance was so impressive that he was even afforded a standing ovation by supporters when he was substituted in the second half - a far cry from earlier in the season when Mancini insisted his City career was over.

“It’s normal,” said Mancini. “Carlos made a mistake like Mario. I think once a guy apologizes, everything is finished.” AFP