The cosmetics of the month club

The cosmetics of the month club 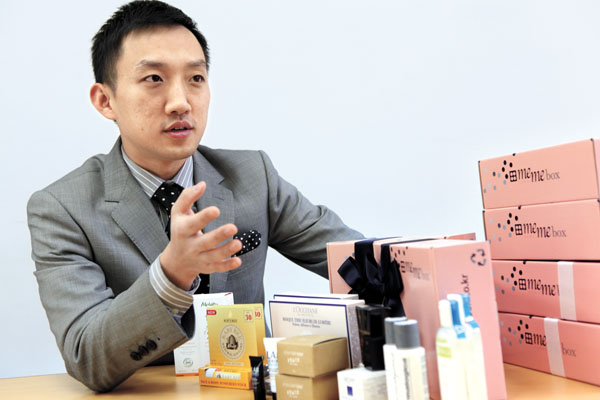 Memebox CEO Ha Hyung-seok shows samples of the many branded cosmetics his company sends customers for a monthly subscription fee. Provided by the company


While online retailers are frustrated with a revised cosmetics law that completely banned their sale of cosmetic samples from Feb. 5., there’s a 29-year old businessman who earns 200 million won ($175,453) a month by selling cosmetics samples to consumers on monthly subscription service.

Since then, Memebox has attracted over 10,000 subscribers.

“Just like newspapers, which deliver the essence of information to readers, I saw potential in a subscription system that delivers the best products picked by experts,” Ha said in an interview with the JoongAng Ilbo last Friday.

Memebox sends customers a box of cosmetics samples from 10 premium brands such as Vichy, Guerlain, and L’occitane for a 16,500 won monthly subscription fee.

Ha gets cosmetics samples free of charge from cosmetic companies, but he says they benefit from the business model too.

“Free cosmetic samples were normally given away at department stores or mailed with magazine subscriptions,” Ha said. “Given that many women prefer to test products before buying them, cosmetics firms also benefit from subscription commerce because they get a new way of reaching customers.”

A revised cosmetic law prohibits the sale of samples but Memebox said its business is legal because it doesn’t charge customers by the piece but rather by a monthly subscription.

Ha got the idea of Memebox from a friend who runs a similar business in Hong Kong.

Subscription commerce for samples was pioneered by U.S. company Birchbox, which has been delivering a box of cosmetics samples per $10 monthly subscription since 2010.

Ha started Memebox with 35 million won in investment from himself and four partners. It wasn’t an easy start, he says.

Ha made cold calls to set up meetings with marketing people at cosmetics companies. Ha’s four partners prepared the boxes of samples and marketing was done through social networking services.

“We earned a profit from the first month because we minimized expenses,” Ha said. “We were ignored by cosmetics companies when we first approached them, but now they come to us .”

Memebox’s next goal is to sell products for babies, men and soldiers.

“Some organic produce growers contacted us because they’re interested in using our business model,” Ha said.

Currently, all subscribers at Memebox get a box with the same cosmetic items per month, but the company is currently in discussions with cosmetics firms about providing samples tailored to each customer’s skin type.

“We will continue providing valuable information and products to customers to achieve sustainable growth,” he said.