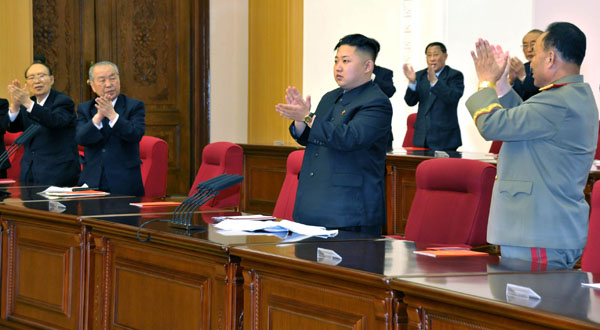 
North Korea moved new people into key posts in the ruling party, raising speculation that its young leader Kim Jong-un is organizing his own inner circle to consolidate his power.

The North’s official Korean Central News Agency reported yesterday that the promotions were made at a special conference of the ruling party Tuesday.

Choe Ryong-hae, 62, is emerging as a key aide to the new leader. Choe used to be a secretary of the ruling Workers’ Party, but since this month he has been made director of the General Political Bureau of the powerful National Defense Commission, KCNA said yesterday.

“That position is higher than the defense minister, who is Kim Jong-gak,” an intelligence source familiar with North Korean affairs said on the condition of anonymity. “His job is mainly watching any antigovernment moves or ideology in the military, which is the most important thing in the reclusive communist country.”

Choe’s family has a long relationship with the Kim dynasty. Choe’s father, Choe Hyon, who died in 1982, was a friend of North Korean founder Kim Il Sung during the men’s early years as communist guerrillas, and later served as North Korea’s defense minister. Choe Hyon’s family is known as a “family of loyalty” in the North.

“As a secretary of the party, Choe used to lead three youth organizations, drumming up public support for Kim Jong-un among younger people,” Cheong Seong-chang, a senior fellow at the Sejong Institute, said. “Choe is relatively young among North Korea’s high-ranking politicians, so he could bring a generational shift in the party.”

Hyon Chol-hae, a former deputy director of the General Political Department of the Korean People’s Army, was also promoted to be a member of the ruling party’s politburo, along with Jang Song-thaek, Kim Jong-un’s uncle and guardian. Hyon and Choe were given the military title of “vice marshal” a day before the party conference. Hyon was also promoted to first deputy defense minister Tuesday.

Kim Jong-gak, who was promoted to minister of the People’s Armed Forces, is a military figure that analysts regard as one of “Kim Jong-un’s men.”

Kim Kyong-hui, the heir’s aunt and Jang Song-thaek’s wife, was also named secretary of the Central Committee of the ruling party.

However, Kim Yong-choon, who used to be a close aide to the late leader Kim Jong-il, was dismissed as defense minister.

“North Korea is trying to replace a generation of powerful elite officials in order to bolster the upcoming polices of Kim Jong-un,” Yang Moo-jin, a professor at the University of North Korean Studies, said. “In particular, Choe is the symbol of younger officials gaining power.”