Many races decided by small margins this year

Many races decided by small margins this year 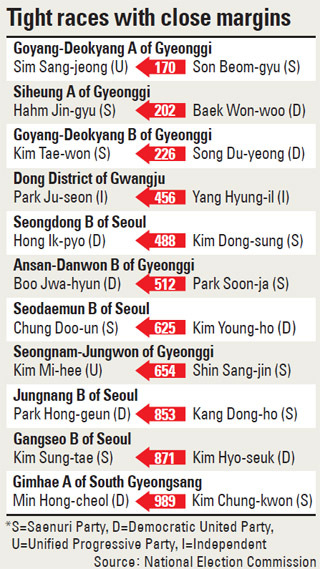 Multiple races came down to the wire this year.

It wasn’t until 99.98 percent of the votes were counted after Wednesday’s general elections that Sim Sang-jeong, co-chairwoman of the minor opposition Unified Progressive Party, overturned her rival in the race.

In the end, Sim secured a parliamentary seat, battling against Son Beom-gyu of the ruling Saenuri Party in the Goyang-Deokyang A District.

Results of the recent political races were hard to predict until the ballots were fully opened hours after midnight as the margin of victory for 11 districts was less than 1,000 votes. These unpredictable matches were particularly concentrated in the Seoul and Gyeonggi areas.

The neck-and-neck race itself was dramatic for Sim, as she was behind her contender by around 200 votes until the last minute before finally defeating Son by the lowest margin of 170 votes among the 246 constituencies across the nation. She received a total of 43,928 votes, which is 0.2 percent more than Son.

Even before the legislative elections, the Goyang-Deokyang A District was considered a fierce battlefield. Exit polls showed 49.7 percent of the voters supported Sim while 48.9 percent supported Son. Sim was the only single candidate from the liberal alliance camp to run for this district after three parties - the Democratic Labor Party, the People’s Participatory Party and the New Progressive Party - joined hands to create the UPP last month. Observers say that the liberals forming an alliance allowed her to gain the victory.

In the 2008 general elections, Sim had lost to Son by around 3,000 votes. At that time she blamed the then-Democratic Party for taking 11 percent of the total votes.

In other areas of Gyeonggi, Kim Tae-won from the Saenuri Party, who ran for Goyang-Deokyang B, also had to endure a grueling match against the DUP’s Song Du-yeong to find out only after midnight that he won by 227 votes.

In Seoul, the race with the tightest margin was in Seongdong B District where the opposition party’s Hong Ik-pyo battled the ruling party’s Kim Dong-sung.