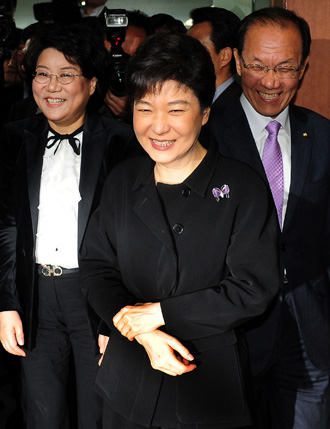 Park Geun-hye, center, interim head of the ruling Saenuri Party, walks out of a press conference yesterday at party headquarters after winning the majority of seats in the National Assembly. [NEWSIS]

The ruling Saenuri Party held on to its majority in the National Assembly in a surprise comeback that will fuel the political fortune of Park Geun-hye, the conservatives’ frontrunner for the presidential race in December.

The Saenuri Party’s victory cleared the path for Park to run in the presidential race, as she managed to rescue a sinking party through aggressive reform measures and run its campaign in a crucial legislative election.

In contrast, the DUP will suffer serious fallout for losing an election it was leading at the outset. The liberal alliance of the DUP and the UPP won only 140 seats, and their call on voters to “pass judgment” on the Lee Myung-bak administration backfired.

The UPP also failed in its aspiration of winning at least 20 seats to become an independent negotiation group on the floor, although the 13 seats it won are the most in its history. In 2004, the party’s predecessor won 10 seats. 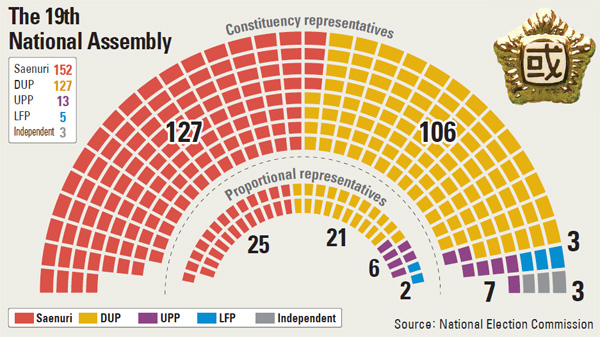 After the Saenuri Party’s victory was confirmed, Park held a press conference at its headquarters to declare a new start for the conservative ruling party ahead of the presidential election.

“We shall start over with the realization that we will go down in history as sinners if we return to our former ways,” Park said. “We will keep our promises to the public at all costs.”

She said the party wouldn’t waste time correcting problems uncovered during the campaign period, promising a law to prohibit illegal spying activities by the government.

Early in the campaign, a scandal over abuse of power by the Prime Minister’s Office, which allegedly spied on critics and rivals of the government, threatened the ruling party’s chances in Wednesday’s general election. That scandal was ultimately eclipsed by a furor over raunchy, sexist and insulting remarks made by opposition candidate Kim Yong-min.

“We will never waste time in the future on things that are not directly linked to the people’s livelihoods,” Park said, stressing that there won’t be factional strife in the party as in the recent past. She promised to do her best so that “voters who did not vote for the Saenuri Party this time will support it.”

Park also said the party will elect a new leadership to normalize its operation. Since December, the Saenuri Party has been led by an emergency council formed by Park to overhaul its tarnished image.

Once the Saenuri Party confirms its new leadership, Park is expected to stay away from party affairs until the presidential primary.

In the press conference, Park distanced herself from the Lee Myung-bak administration by promising to resolve the illegal spying scandal. 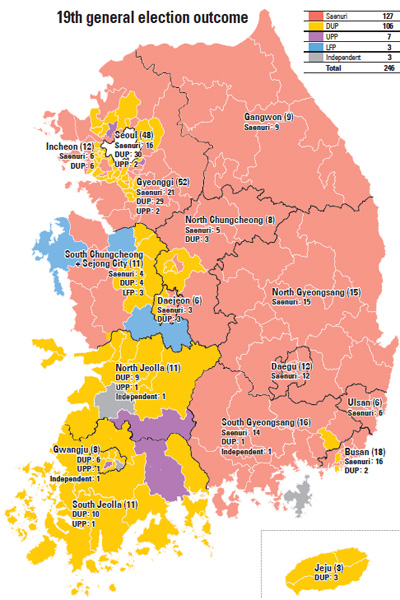 The Saenuri’s victory is expected to cement her “invincible Park” image in the presidential race because her turning around of the party in the past few months is even more dramatic than a similar role she played eight years ago. When she took control of the party in December, its reputation was in shambles and under attack for a succession of power abuse and corruption scandals involving lawmakers and aides of President Lee.

Then, speculation was rife that it would be hard for the party to win even 100 seats in the general election.

As she did before the 2004 general election, Park initiated strong reform measures, changing the party’s name from the Grand National Party to the Saenuri Party and overhauled its platform. She toured the nation and appealed to voters to stop the out-of-control welfare promises of the liberal opposition parties. She dodged the illegal spying scandal by claiming she was also spied upon, while attacking the liberals for flip-flopping on their policies and nominating poor candidates for the race.

“The decisive factor in the Saenuri Party’s victory was that its owner was changed to Park,” said Lee Taek-soo, head of the polling company Realmeter. “After that, the opposition parties’ strongest weapon - that voters should render a judgement on President Lee - lost its power. Park’s appeal to voters to support the future power overwhelmed the opposition parties’ message that they should judge the past.”

According to analysts, the liberals’ strategy of linking Park and Lee as a single target failed because voters knew that Park and Lee led rival factions in the party and were actually combatants with each other.

It won none in Gwangju and Jeolla, however.

The Saenuri Party’s strong showing in Chungcheong was a significant change, as it only won one out of 24 constituencies four years ago. Park’s strong support of relocating government offices from Seoul to Sejong City was the reason, a Park aide said. The Lee administration attempted unsuccessfully to have that plan scrapped. 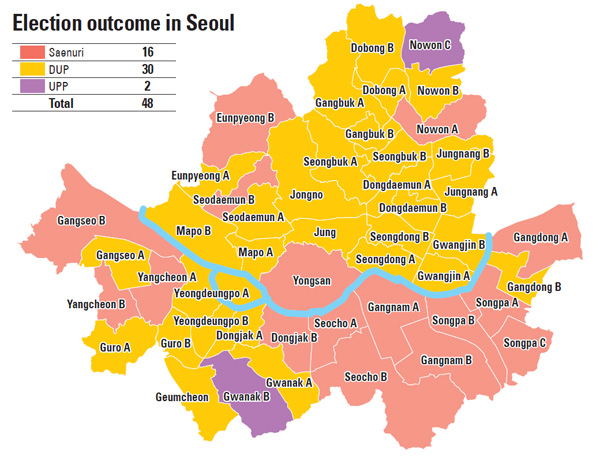 But the Saenuri Party’s struggle in Seoul, Incheon and Gyeonggi showed that Park’s path to the presidency will have its bumps and turns. The ruling party won a landslide victory in Seoul in the last election, but Wednesday it won only 16 out of 48 seats in the capital city, while the DUP won 30. Park’s low popularity among white-collar workers in their 20s and 30s living in the capital region was already seen in the 2007 presidential primary, which she lost, and this week’s election showed the trend continued.

The biggest debacle for the liberals was the revelation of raunchy, foul-mouthed and sexist jokes made by Kim Yong-min, a shock jock co-host of the popular liberal podcast “Naneun Ggomsuda” (I’m a Petty-Minded Creep). Some of his jokes on the podcast insulted senior citizens and Protestants. The leadership of DUP Chairwoman Han Myeong-sook is at risk as she failed to resolve the situation smoothly. Han advised Kim to stand down from running in Seoul’s Nowon A District but he refused.

Some DUP members have already demanded that Han step down from the chairwoman post, but she remained silent yesterday.

“Heaven and the public gave us a precious opportunity to win back power, but the DUP spoiled it with its high-handed leadership,” said former representative Jang Sung-min in a statement. “Han must give up her chairwomanship and proportional representative seat and leave politics.”

He also said loyalists of former President Roh Moo-hyun must be excluded from running the party as they have become the symbol of its arrogance.

Representative Park Jie-won, a DUP Supreme Council member, said the party must learn its lesson and prepare better for the presidential race. He also complained that politicians from Jeolla were treated poorly in the nomination process although they were the core of the DUP.

With the liberals’ poor performance, the key presidential hopefuls of the DUP appeared to have lost momentum. Moon Jae-in, former chief of staff of the Roh Blue House, won his race in Busan’s Sasang District against the Saenuri’s reform icon Son Su-jo, but by a slim margin.

Chung Dong-young, who lost the presidential race to Lee in 2007, failed to win his battle in Seoul’s Gangnam B District. Sohn Hak-kyu, the party’s former chairman, had nearly no influence in the DUP campaign.

Liberals increasingly said yesterday that the time has come for Ahn Cheol-soo, a software mogul with a wide following among the young, to step up to the presidential plate. The share price of Ahn Lab, which he founded, skyrocketed as the market opened yesterday. Ahn has been evasive as to whether or not he will run and has no background in politics.

It remains to be seen if Ahn can manage to slow Park’s momentum following her general election victory.

In the two-way race between Park and Moon, Park was backed by 47.8 percent and Moon 31.4 percent.

In a race of more than two candidates, Park was supported by 37 percent, while Moon was ranked second with 17 percent and Ahn followed with 16 percent.

The poll showed that 42.6 percent of respondents said their perception of Park was improved by the general election.