Saenuri Party keeps majority in Assembly with a surprise win

Saenuri Party keeps majority in Assembly with a surprise win 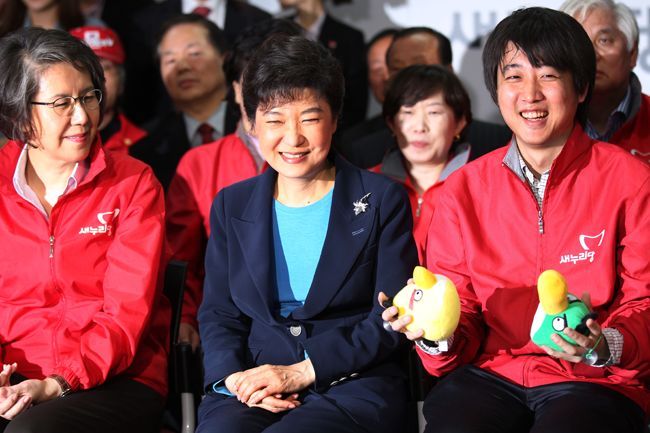 The ruling Saenuri Party held on to its majority in the National Assembly in Wednesday’s general election, in a surprising comeback from behind attributed to the leadership of Park Guen-hye, the conservatives’ frontrunner for the presidential election in December.

While Park was credited largely for rescuing the sinking conservative ruling party against the liberal alliance of the DUP and UPP, the liberals were most damaged by a furor over raunchy and sexist remarks by its candidate Kim Yong-min, a cohost of popular podcast “Naneun Ggomsuda,” who refused to leave the race. 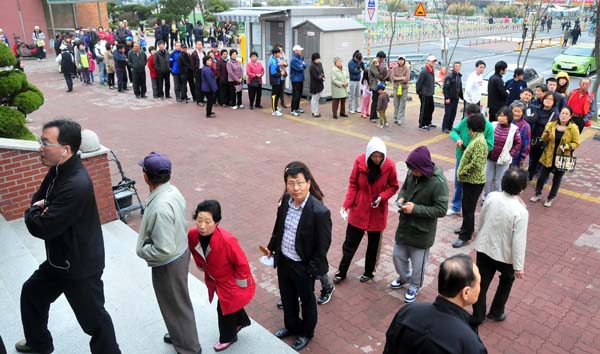 Voters wait in line yesterday at a polling place in Jochiwon, Yeongi County, South Chungcheong, to cast their ballots for the Sejong City representative. The electoral district was created this year. [NEWSIS]

The DUP conceded its defeat. “We will deeply reflect upon the meaning of today and try ceaselessly to be reborn as a party that the people can rely on,” said DUP spokeswoman Park Sun-sook.

The ruling party stressed that it would follow through with pledges. “Only months ago, the forecast was so gloomy that the people said it would be hard for us to win even 100 seats,” said Lee Hye-hoon, the chief campaigner for the Saenuri Party, said. “We will keep the promises we made to the people without fail.”

The Blue House issued a statement that it is grateful for the people who made “wise choices.” The Lee Myung-bak administration will attend to state affairs and the livelihood of the people with a stable attitude and wrap up its key projects, presidential spokesman Park Jeong-ha said.