Indulging in history along with a meal

Indulging in history along with a meal 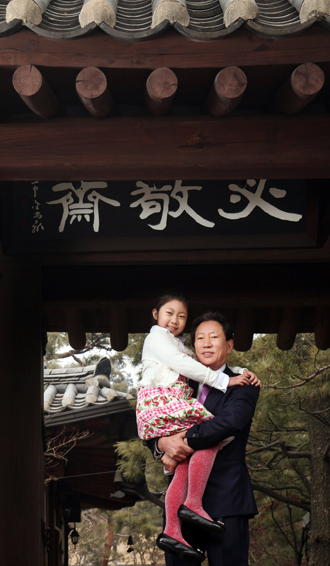 Lee Byeong-moo poses with his granddaughter. Lee says he wants his children to realize the importance of preserving tradition for future generations. Photo by Hwang Jeong-ok

As a descendent of Grand Prince Gwangpyeong from the Joseon Dynasty, Lee Byeong-moo, 68, is no typical restaurant manager. And the business he manages isn’t so typical either.

His upscale, traditional Korean eatery in Suseo-dong, southern Seoul, is housed in an a traditional complex called Philkyungjae, the only one of its kind in Seoul that is more than 500 years old. Philkyungjae was built by Lee Cheon-su, one of Lee’s ancestors, during the 15th century, and some of the most respected figures of the Korean history were spent time there.

Two people in particular attach Lee to the house: his ancestor the Grand Prince Gwangpyeong and his grandfather Lee Yu, both of whose graves are located in the backyard. And it is this connection that motivates Lee to tend to the grounds, despite the difficultly of the work, and to endeavor to spread the history of the place to others, in whatever means possible.

“It’s a formidable task - keeping your ancestral home. Before there were servants, but times have changed,” he said.

Every year, some 30,000 foreigners visit Philkyungjae, including influential dignitaries like politicians, CEOs and top scholars. But the national government saw even more potential for the structure as it was preparing to welcome international visitors to the 2000 Asia-Europe Meeting (ASEM) and the 2002 FIFA World Cup. So in 1999, it asked Lee and his family to transform what had been a burial site for their ancestors into a restaurant where visitors could enjoy traditional architecture and food at the same time.

Several members of the Jeonju Lee clan, from which Lee is descended, opposed the proposed restaurant at a place meant to honor their ancestors, an especially poignant objection as the structure’s very name means “respect the elderly and live by that principle.”

Lee’s hope to own and run it was particularly contentious. As the jongson, or eldest male of jongga, a Korean concept referring to prestigious households descended from distinguished ancestors through the eldest son of each generation, some family members saw restaurant work as inappropriate for him.

Lee pushed for the restaurant conversion, though, seeing the possibility of attracting more visitors as good for the country.

“I thought it was necessary to let others know about Philkyungjae as it’s the only hanok [traditional Korean house] with a more than 500-year history in Seoul,” he said. “A restaurant is a friendly way to approach the public, just as the mansions or castles of aristocrats in Europe have been renovated as lodging.” 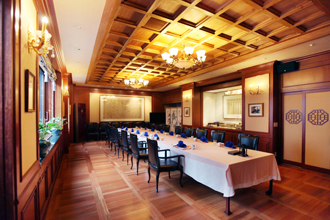 Yihodang is a structure within Philkyungjae that houses a number of historical artifacts. It is also used as a banquet hall to host foreign dignitaries.

The restaurant project was eventually approved, though the lengthy history of the structure that makes it so enthralling to visitors also meant that the development of the restaurant had to be done cautiously.

Because of its important place in Korean history, the culture ministry designated Philkyungjae as Traditional Structure No. 1 in 1987. It was once 99 kan (595 square meters or 6,400 square feet) in size, making it the largest of noble households from ancient Korea. But today, only around 50 kan remain due to the severe floods of 1925.

Lee said he wanted to be sure to preserve what remains of the house, especially the exterior, and not make it “too much like a restaurant.” For this reason, the cooking facilities were set up in the back of the main building to make them unobtrusive.

The food served is strictly traditional, with menus inspired by cuisine unique to the Jeolla region.

One of the buildings in Philkyungjae is called Yihodang, which means preserving two things: the household’s reputation and tradition. Inside is where Philkyungjae’s history and the restaurant really come together.

The venue is often used as a banquet hall to host foreign dignitaries, but inside, a number of artifacts are on display for easy viewing. The historical pieces include orders and letters from Joseon kings to the members of the Jeonju Lee clan who were in government posts, as well as photos of respected guests who have visited Philkyungjae, like Chinese Vice President Xi Jinping and Pope Benedict XVI.

The strict emphasis on remaining true to Philkyungjae’s historical roots is not limited simply to the complex itself, but rather to the entire area around it, a fact that has led to disagreements with developers.

“Frankly, the site of Philkyungjae is an exceedingly high-priced plot of land,” Lee said. “If you developed the site for something else, you could make easy money instantly. But that is not my responsibility as a jongson. I have to think of what’s good for the neighborhood and the country.”

In 2008, there was a government announcement that a 20-story apartment building would be built in front of Philkyungjae. Lee and others who opposed the idea submitted a petition to the Gangnam District Office to protest what they called reckless city development and instead asked the government to focus on historical preservation and the creation of green space.

After three years of struggle, the plan for the apartment building was scrapped. Now, a small park is planned for the area.

The construction plans, though controversial, did give Lee some ideas as he looks to the future of Philkyungjae and that of his son, who he hopes will one day take care of the historical complex just as he and his ancestors have. He said he now plans on focusing even more on developing the entire area around Philkyungjae into a traditional neighborhood, rather than simply focusing on preservation.

“One day, my son will follow my footsteps and take care of Philkyungjae,” Lee said. “I know his commitment cannot be the exactly same as mine. But I just wish that he realizes that it is the current generation’s duty to turn the tradition over to the future one.”