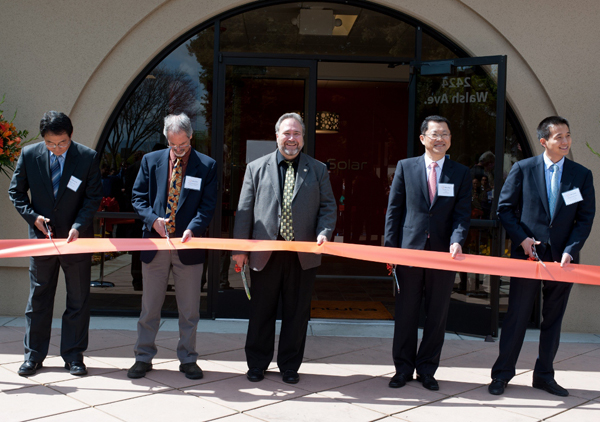 
Hanwha Group is now operating a research center for photovoltaic energy in the United States as it ramps up efforts to develop this business as a future growth engine.

The group announced yesterday that it held an opening ceremony for Hanwha Solar America, which is based in Silicon Valley in Santa Clara, California.

Hanwha decided to set up the research center in the U.S. in order to concentrate efforts on developing original technologies that will lead the future of the photovoltaic industry, including next generation solar cells.

The group already has two research institutes in Korea and China. The new center will synergize with these, the group said.

“The photovoltaic business is a potential growth engine for Hanwha,” said Kim Hee-cheul, president of Hanwha SolarOne, a solar business unit of the group.

It was established in 2004 as part of the group’s plan to make a 3 trillion won ($2.64 billion) investment in the business by 2018. The company was the world’s eighth largest in this segment as of 2011, when it was able to produce 900 megawatts (MW) of solar cells and 1,300 MW of modules per year. Hanwha Chemical owns a 49.9 percent stake in the company.

“Consistent investments in the solar-energy business will give Hanwha a significant competitive edge,” Kim said.

He stressed that solar technologies are evolving so fast that companies cannot afford to stop investing in R&D.

Despite negative outlooks for the photovoltaic industry, Hanwha Chemical has continued to make investments in a 10,000-ton polysilicon plant in Yeosu, South Jeolla, with an aim to start operations in late 2013.

It has acquired a handful of solar ventures to enhance its technological competitiveness, including California-based Crystal Solar and Boston-based solar venture called 1366 Technologies.

“Some positive signals are showing up in the photovoltaic industry, including possible increases in Chinese demand and economic feasibility,” said Kim Dong-joon, an analyst at Shinhan Investment.

Although solar energy gained popularity as a promising alternative to coal in mid-2000, the solar market has been mired in a recession triggered by falling demand in Europe in the wake of the global financial crisis.

“The photovoltaic market will see explosive growth starting from next year, which will serve as a huge opportunity for businesses that have been preparing for the market,” Kim said.