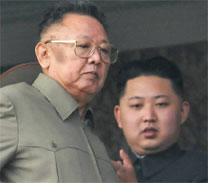 In a note written exactly two months before his death, former North Korean leader Kim Jong-il ordered his coterie to continue developing nuclear weapons and not trust its closest ally, China, according to a defector.

“Retaining and developing nuclear power, long-range missiles and biochemical weapons is the way to maintain peace on the Korean Peninsula,” Kim wrote in the note to his sister, Kim Kyong-hui. “Keep the songun [military-first] policy until the end. If we are lax in national defense, we will be slaves of superpowers.”

Lee Yun-keol, a North Korean defector in the South and president of the North Korea Strategic Information Service Center, said he obtained a portion of the note’s content and he shared it with the JoongAng Ilbo and Korea JoongAng Daily.

“Although I can’t tell you the source, I got inside information on the note’s contents,” Lee said yesterday. “Kim Jong-il sent the note to his sister, Kim Kyong-hui, on Oct. 17, 2011.”

The late leader also advised his circle to be vigilant about both China and the United States.

“We must win in the psychological fight against the United States,” Kim wrote. “We should become a state with legitimate possession of nuclear power and weaken the influence of the United States.

“China is currently the closest country to us, but the one we should be careful of the most,” Kim wrote.

In the note, Kim said the purpose of the six-party talks on nuclear disarmament was the lifting of international sanctions against North Korea and their “ultimate goal” is unification of the Korean Peninsula “by the Kim dynasty”.

To prevent political chaos after he died, Kim named a series of officials as guardians for his youngest son Jong-un.

“The implementation of this note is to be carried out by Kim Kyong-hui,” he wrote. “Jong-un should be in the highest position within a year, guarded by the party and the military.”

His sister Kim Kyong-hui and her husband Jang Song-thaek were on the list, along with Choe Ryong-hae, director of the General Political Bureau of the National Defense Commission; Kim Jong-gak, minister of the People’s Armed Forces; and Kim Kyong-ok, first vice director of the Organization Guidance Department of the ruling Workers’ Party.

Kim also wrote that Kim Sol-song, a daughter of his from his second wife Kim Young-sook, should “be supported as a caretaker of Jong-un.”

Kim’s first son Jong-nam, who fell out of favor and now lives in Macau, was also mentioned. “Be nice to Kim Jong-nam,” he wrote. “He’s not a bad boy.”

“In the note, Kim was apparently taking care of every single family member of his,” said Lee, the North Korean defector.

“He especially seemed to be concerned that his first son would be also executed after his death, given the fact that he expelled his uncle and other powerful figures after his father Kim Il Sung died.

“However, while he worries about his family, he rarely mentioned how to improve the chronic food shortage in the country and save the starving people, which is a significant characteristic as dictator,” Lee said.

“Rather, he wrote in the note, ‘Execute those calling for an economy open to the outside world or political reform.’?”