Han steps down as DUP head after defeat

Han steps down as DUP head after defeat 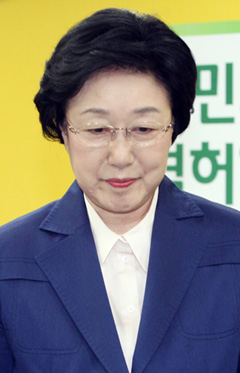 Han Myeong-sook announces her resignation as chairwoman of the DUP yesterday. [YONHAP]

“I will humbly take responsibility for the results in this general election,” Han said. “I couldn’t persuade citizens who agreed we should cast a verdict on the current administration and the ruling party to go to polling stations. As the chairwoman of the party, I will leave taking all responsibility.”

Han said she will stay in the party and keep her seat as a proportional representative to help the DUP win the December presidential election.

The DUP is now agonizing over who will lead the party ahead of the crucial presidential election.

According to internal rules, the party should hold an election to select a new leader within two months. During the two-month-long vacancy, an interim leader will control the party.

Although others on the party’s supreme council could succeed Han, senior advisors are suggesting they all step down with her.

Representative Moon Sung-keun, a supreme council member who earned the second-largest votes after Han in the leadership election in January, could fill her post, but he lost his race in Busan against a Saenuri candidate. Park Young-sun recently quit the leadership council after saying the party’s nomination procedure for the general election was unfair. Park Jie-won is agreeing to senior advisors’ suggestion that he resign.

So chances are rising that the party will go through a full change of leadership. A string of DUP members who won elections this week are emerging as potential successors, including Lee Hae-chan, who won in the administrative city Sejong; Chung Sye-kyun, the winner in Jong-no, central Seoul; and Park Jie-won, the three-term lawmaker for Mokpo, South Jeolla.

A high-ranking official told the JoongAng Ilbo yesterday that during the campaign for this week’s election, Han was overly worried about losing votes from fans of podcast co-host Kim Yong-min, who unsuccessfully ran for the DUP from Nowon A district in Seoul.

Kim helped the party lose the election by failing to abandon his candidacy after a nationwide uproar over the raunchy jokes and foul language he had used on the shock jock podcast “Naneun Ggomsuda,” or “I’m Petty-Minded Creep.”

The official said that on April 6, he called Han to ask her to expel Kim out of concerns about losing support in Gangwon and Chungcheong because of the uproar over Kim’s insults and sexist jokes. He told Han that if she didn’t expel Kim, he would issue a statement condemning him.

But Han dissuaded him by saying: “Do you know how many members the fan club [of “Naneun Ggomsuda”] has? Approximately 200,000. There are millions of people nationwide listening to the show. If we expel him, we could face a backlash.”

The official said that Moon Jae-in, a senior advisor of the party, and Chung Bong-ju, a former DUP lawmaker in jail for slander and a co-host of “Naneun Ggomsuda,” also persuaded Han not to drop her party’s support for Kim.

Eventually, Han issued a statement saying “I suggested he stand down, but he still wants to be ‘judged by the voters’. I apologize to you over and over.”

The DUP official told the JoongAng Ilbo, “As a leader, she couldn’t make an important decision and was too worried about the outcry from the fan club of a party member, which is a tragedy. ”