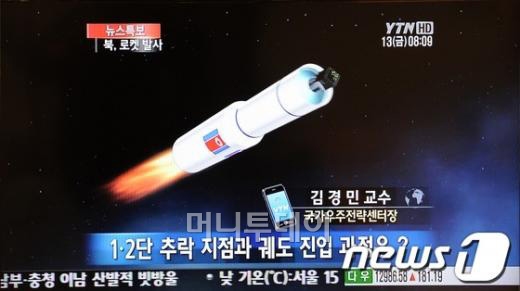 North Korea on Friday launched a long-range rocket which appeared to have failed and fallen into the ocean, South Korean and Japanese authorities said.
South Korea's defence ministry said the rocket was launched at 07:39 a.m.
"It seems that the rocket has failed," ministry spokesman Kim Min-Seok told journalists.
"But we need more analysis for confirmation," he said, adding U.S. and South Korean officials were studying the trajectory.
North Korea has said the rocket would place a satellite in orbit for peaceful research purposes, but Western critics see the launch as a thinly veiled ballistic missile test, banned by United Nations resolutions.
The UN Security Council will meet in emergency session on Friday “to decide its next step” following the launch, a UN diplomat said.
Japan’s defense minister said that North Korea had launched a “flying object” that fell into the ocean after a short flight.
“We have the information some sort of flying object had been launched from North Korea” around 7:40 a.m. Defense Minister Naoki Tanaka told reporters.
“The flying object is believed to have flown for more than one minute and fallen into the ocean. This does not affect our country’s territory at all.”
Immediately after the launch, South Korea issued an order urging residents near the inter-Korean border to seek shelter to protect themselves from any debris that might fall from the rocket, Yonhap News Agency said.
North Korea says its rocket launch is not a banned missile test and that it has every right to send the satellite up, to coincide with Sunday’s centenary of the birth of its founding leader Kim Il-Sung.
The 30-metre (100-foot) Unha-3 (Galaxy-3) rocket had been positioned at a newly built space center on the country’s northwestern Yellow Sea coast.
North Korea has invited up to 200 foreign journalists to Pyongyang for the launch and the weekend commemorations, the largest number of overseas media ever welcomed in to the reclusive state.
The reclusive nation is in the midst of cementing a power transition between late leader Kim Jong-Il who died last December and his untested son Kim Jong-Un who is aged in his late 20s.
US Secretary of State Hillary Clinton had earlier warned North Korea of UN Security Council action if it pressed ahead with the launch.
“If Pyongyang goes forward (with the launch) we will all be back in the Security Council to take further action,” Clinton told reporters after consulting with her counterparts from the Group of Eight industrial nations.
“There is no doubt that this (launch) would use ballistic missile technology,” she said, urging Pyongyang to refrain from “pursuing a cycle of provocation.”
Her comments were followed by an unusually strongly worded statement issued by foreign ministers of the Group of Eight which “demanded” that North Korea abandon the launch. AFP