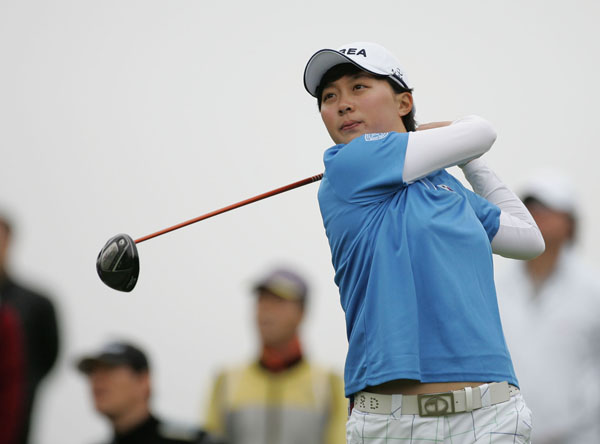 Kim Hyo-joo makes a tee shot at the 2nd hole of the 2012 Lotte Mart Women’s Open at the Lotte Sky Hill Country Club in Seogwipo, Jeju Island, yesterday. The 17-year-old amateur golfer Kim won the event with a score of 16-under 272. [YONHAP]

At the Lotte Sky Hill Country Club in Seogwipo, Jeju Island, Kim finished the four-round tournament at 16-under 272 and claimed her first professional title.

Runner-up Moon shot 3-under 69 yesterday to finish the tournament at 7-under 281. Kim Ha-neul, who collected the most prize money and most wins last year, tied for third with Hong Ran at 3-under 285, while defending champion Sim Hyun-hwa had a disappointing 50th-place finish at 11-over-par.

Kim, who is a sophomore at Daewon Foreign Language High School, became the 21st amateur golfer to win the KLPGA event. “It was my dream to win at a professional tournament,” Kim said at a press conference after the event. “I’m happy that I won with good scores from the first day.”

Kim, who has 14 wins in amateur tournaments, never gave up the top position from the opening day. She was co-leader with Lee Jung-min after the first round at 6-under but became sole leader from the second round and drove through until the end.

In the final round, Kim was paired with 29-year-old Moon and defending KLPGA player of the year Kim Ha-neul, but didn’t break down among professionals. She fired 6-under 66 yesterday, making only one bogey at the par-3 14th hole while collecting seven birdies with her accurate iron shots and putts.

“Ha-neul and Hyun-hee treated me well, so I made plays comfortably,” Kim said. “I think I won because I had fewer mistakes in my short game compared to yesterday.”

Her victory of 16-under-par matches the best amateur record in the KLPGA, which is held by Pak Se-ri. Pak, who was inducted into the World Golf Hall of Fame with 25 LPGA victories, won the 1995 Christian Dior Open with the same score at age 18. In addition, Kim’s nine-stroke victory is also the second-biggest amateur win in KLPGA history behind Pak, who had a 10-stroke win in her 1995 victory.

Since Kim is an amateur, the winner’s prize of 100 million won ($88,000) went to second-place Moon, but Kim will be able to compete with some of the world’s top golfers in the Lotte LPGA Championship, which starts on Wednesday in Hawaii.

“I’m half-anxious, but half-excited for my first LPGA tournament,” said Kim, who names Choi Na-yeon and Shin Jiyai her idol golfers. “I want to learn a lot when I get there and leave a good record of my own.”

After the event, Kim said she will set her sights on winning the gold medal at the World Golf Amateur Team Championships in Antalya, Turkey, in September. She will try to turn professional in November through a KLPGA seed qualifier, she added.