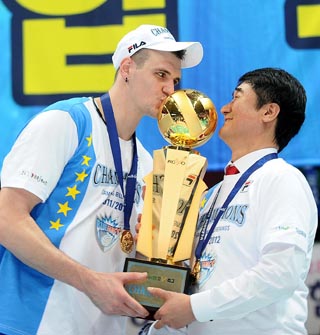 After the Daejeon Samsung Fire Bluefangs won the Korean Professional Volleyball League (V-League) last Thursday, all eyes are now on Gavin Schmitt, who must decide if he will spend another season with the club.

Regular season champion Bluefangs beat the Incheon Korean Air Jumbos 3-0 (25-22, 25-21, 25-17) at Dowon Gymnasium in Incheon on Thursday and wrapped up the best-of-five V-League Finals in four matches. It was the Bluefangs’ fifth consecutive and sixth overall V-League title.

After the victory, pundits and fans praised the leadership of coach Shin Chi-young, who earned 14 titles in his 17 years with the club - including in his amateur days - and veteran players Seok Jin-wook, Yeo Oh-hyun and Ko Hee-jin for setting good examples for younger players. However, they agree that Schmitt’s performance was the most important factor in earning the trophy this year.

In the championship series, the 26-year-old attacker averaged 37.8 points with an attack success rate of 55.1 percent. In the finals, the Canadian international took care of more than 60 percent of the Bluefangs’ attacks.

He also stood out in serves, outnumbering the Jumbos’ Martin Nemec, the No. 1 server in the league, in the finals. Schmitt averaged 0.733 per set in the finals, while injury-plagued Nemec only had 0.357.

With these numbers, Schmitt was named the most valuable player for the championship series after receiving 16 out of 22 votes from V-League-registered reporters. He is now the first player in V-League history to have been named MVP for three consecutive years during the finals.

This is no surprise, as Schmitt has been dominant here since joining the V-League in 2009. For this season alone, he amassed 1,112 points in 34 matches, keeping the top attacker position that he has now held for three years. But what’s more impressive is the way he has improved his attack success rate.

The 207-centimeter (6-foot, 9-inch) -tall power spiker’s success rate stood at 55.5 percent in his debut season and at 55.4 percent last season. This season, his number has increased to 59.3 percent.

But after the championship series, Schmitt avoided answering questions about whether or not he will stay with the Bluefangs next season, only saying that he will think about his future while resting at home in Canada.

Regardless, Bluefangs coach Shin has already said that he wants to keep Schmitt on for another season and will aim for a seventh V-League title. Last year, he successfully convinced Schmitt to stay and will try to do the same this year.

“I’ll have to talk with him again,” Shin said.

If Schmitt, who has a tattoo on his left side that reads “dedication,” “patience” and “passion” in Korean, decides to re-sign with the Bluefangs, he will be the first foreign player to play in the V-League for four consecutive seasons.