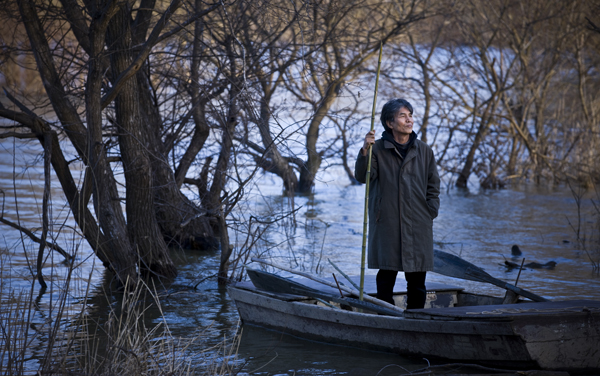 Novelist Park Bum-shin often spends time at Tapjeong Lake near his home in Nonsan, South Chungcheong. Behind him are several trees partially submerged in water. “Trees usually die if they are in the water for a long time. But these still grow up, and I can feel their tenacious grip on life,” Park said. By Kwen Hyek-jae

Novelist Park Bum-shin should be on top of the world. Last year, his 39th as a writer, he published his 39th full-length book, and his novel “Eun-gyo” (2010) is back on the best-seller list after being adapted into a movie. Yet he seems to be in a self-admitted “yearning period,” retreating to his hometown and full of conflicting ideas about what to do next.

Lately, Park has spent five days a week at his home in the village of Jojeong in Nonsan, South Chungcheong. The village, near where the author teaches literature at Konyang University, is a nostalgic fishing town defined by its aromatic seafood shops. Several at the entrance of the town sell maeuntang, or spicy fish stew. Park’s two-story house in Nonsan stands on the roadside peacefully, near Tapjeong Lake. The lake, with a circumference of more than 30 kilometers (18.6 miles), is just visible from his house.

So in many ways, Jojeong seems like the perfect place for a maturing writer to come and seek further inspiration from, to escape the dizzying pace of Seoul for somewhere more suitable for reflection. But that atmosphere comes with a price.

“Once I come to Nonsan, I come to hate going back to Seoul,” Park said in an interview with the JoongAng Ilbo. 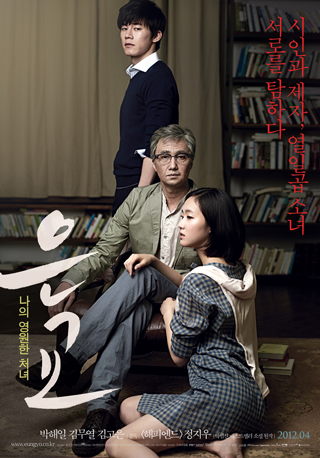 A poster for the movie “Eun-gyo” (“A Muse”), based on Park’s novel of the same title [JoongAng Ilbo]

“But at the end of last winter, I found myself continuing to drink alone, with my loneliness getting deeper and deeper. So I decided to take a position at Sangmyung University in Seoul to make a commute between Seoul and Nonsan mandatory.”

The 66-year-old writer finished teaching at the creative writing department of Myongji University and retired to his hometown last November. Fans have been anticipating the release of his next work, but Park channeled only skepticism when asked about the kind of inspiration he could find in his home village.

Asked whether he would write his 40th novel within this next year, his 40th anniversary as an author, Park was blunt.

“No idea [about a new novel] has hit me since I came to Nonsan,” he said. “I came here impulsively. So I’m just waiting, waiting for [ideas about] a new novel in my hometown where I’ve come back to after an absence of half a century.”

Even though “Eun-gyo” is selling quite well without any effort on Park’s part, he remains restless and unsatisfied about writing.

The film inspired by the book is scheduled for release on April 26 and has already become the talk of the town because of a controversial trailer. It covers the Buddhist idea of humankind’s “five desires and seven emotions” through the love story between 70-year-old poet Lee Jeok-yo and a 17-year-old high school girl named Han Eun-gyo.

“Ontological sadness is the theme of this novel. It’s not just a vulgar melodrama,” Park said in defense of his work.

He remains quite worried about the influence of film on literature.

“Nowadays, I guess I should be celebrating the fact that ‘Eun-gyo’ has made it back to the best-seller list, but honestly, I’m not terribly excited,” he continued. “In the past, literature inspired films, but now it seems that film has the upper hand. I know we can’t help it, but I still feel offended as a writer.”

Understanding “Eun-gyo” simply by watching the film is impossible, he insisted.

On top of all these feelings, Park admitted to experiencing a deep sense of isolation in his quaint village, and he has channeled this as any author would: through writing, even though he insists he has had no new ideas recently.

To get something on paper, he’s begun to keep a virtual diary on his Facebook page to which he connects using an iPhone app.

“Writing nothing makes me feel as if my hands are turning into horseshoes,” he said, making a reference to the title of his 39th novel, “My Hand Turns into a Horseshoe.”

These diary entries, piled up as they are, have now been collected into a collection titled “My Love is Not Over: Nonsan Diary, Winter 2011,” proving that Park is still writing, even if it is not a novel in the classic sense. The collection is set to be published on April 25, and staring from this year, Park plans to bind his diary into a book every year.

“The object of my love in the book is, of course, literature,” he said.

And as he writes about his daily life in Nonsan - a town that is clearly very dear to him but has also made him feel lonely and isolated - Park starts to see a future there.

“My love of literature restarted here in Nonsan,” he said. “I guess I will spend my last years as a writer here.

“Yes, this is the place where I was born, but I think this town is different from what it was 50 years ago. Being here feels like arriving in a new town after a long journey along the railroad of time.”