After years of suspense, Brangelina finally set to tie the knot

After years of suspense, Brangelina finally set to tie the knot 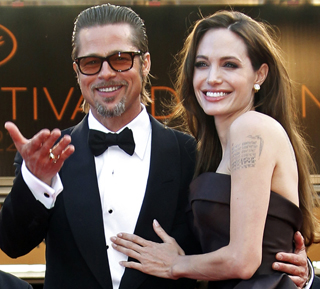 Brad Pitt and Angelina Jolie haven’t set a wedding date yet, but their engagement “is a promise for the future,” Pitt’s manager, Cynthia Pett-Dante, said in an email Friday.

Pitt, 48, and Jolie, 36, have six children together. “Their kids are very happy,’’ Pett-Dante also said.

Jeweler Robert Procop worked with Pitt to design the ring. A news release describes it as featuring a long diamond amid a “galaxy of smaller stones.” It took a year to design.

The A-list celebrities have been partners since they began a relationship in 2005 while working on the film “Mr. & Mrs. Smith.”

Already megawatt superstars in their own right, the romantic pairing of Pitt and Jolie instantly made them Hollywood’s most glamorous and photographed couple. The fact that Pitt was still married to Jennifer Aniston when he met Jolie only added to the tabloid fodder.

As the couple dubbed “Brangelina’’ added to their family over the years through adoption and birth of their children, the question always swirled as to when - or whether - the two would ever wed.

For some time, it seemed as if they might not. They often spoke about how they were comfortable without an official arrangement, and Pitt famously said he didn’t want to get married until all people - including gays - had the same right.

Jolie won an Oscar for her role in 1999’s “Girl, Interrupted.” Pitt was recently nominated for an Academy Award for his role in last year’s “Moneyball.” AP