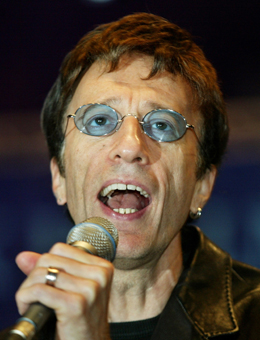 LONDON - Singer Robin Gibb, a founding member of the disco-era hit machine the Bee Gees, is in a coma after contracting pneumonia, his official Web site said on Saturday.

A spokesman for the 62-year-old, who has been battling cancer, was not immediately available to comment on reports in the British media that Gibb had been surrounded by close family in a London hospital and may have only days to live.

“Sadly the reports are true that Robin has contracted pneumonia and is in a coma,” a statement on www.robingibb.com said. “We are all hoping and praying that he will pull through.” The Web site has been closed down temporarily.

An unnamed family friend told The Sun newspaper: “He has kept so positive and always believed he could beat this. Sadly, it looks like he has developed pneumonia, which is very bad in his situation.”

In February, Gibb announced he had made a “spectacular” recovery from cancer, but in late March he underwent further surgery on his intestines.

He was forced to cancel all engagements, including the world premiere earlier this month of his first classical work, co-written with Robin-John, called “The Titanic Requiem”.

According to The Sun, Gibb had emergency surgery in 2010 to treat a blocked bowel and further surgery for a twisted bowel - the condition that killed his twin brother Maurice in 2003 at the age of 53.

He was diagnosed with colon cancer, which later spread to his liver.