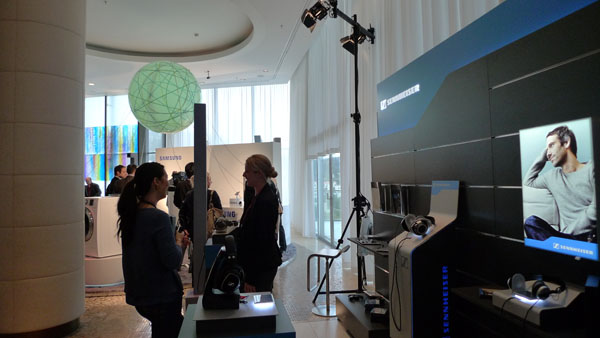 Global consumer electronics manufacturers including Samsung Electronics and some European and Japanese brands display their latest products at booths at the conference.

During a presentation titled “Future of Smart TV” for some 300 tech journalists from more than 45 countries at the 7th IFA 2012 Global Press Conference, Zoeller said the new LED TV will give a “small surprise in terms of design” and the costlier premium TV will have a “pretty new design concept.”

Zoeller added that Samsung, the world’s No. 1 TV manufacturer, is getting ready to launch an organic light-emitting diode (OLED) TV in the second half of this year but did not say the exact date.

At the Consumer Electronics Show in Las Vegas in early January, both Samsung and LG unveiled 55-inch OLED TVs, saying they would go into mass production by the end of this year. 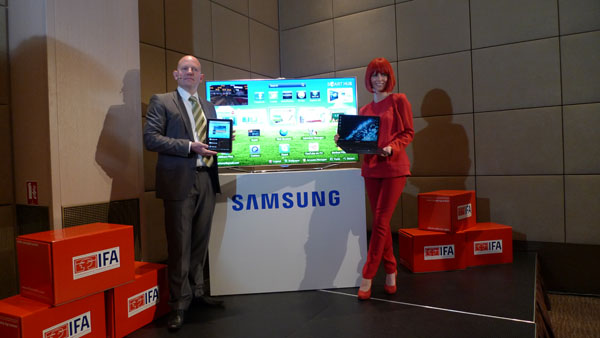 Michael Zoeller, European director for TV/AV at Samsung Electronics, left, and the IFA’s Lady in Red, pose with Samsung’s latest products following a presentation on Friday at the 7th IFA 2011 Global Press Conference in Dubrovnik. By Seo Ji-eun

A 55-inch model is the largest currently-available in the world and OLED TVs are known to be thinner, lighter, clearer yet much costlier than liquid crystal display sets.

While LG said it would put on sale the 55-inch TV in May at the earliest, Samsung has been expected to launch the model in tandem with the opening of the London Olympics on July 27 for maximized promotional effect.

However, market analysts in Dubrovnik were not entirely upbeat about the prospects for OLED TVs.

Paul Gray, director of TV electronics research at DisplaySearch Europe, a market research firm, said at a press briefing Friday afternoon that OLED still remains a niche, given some technical problems that need to be resolved.

He mentioned the hefty price tag as another barrier to mass acceptance. According to industry estimates, a 55-inch OLED TV rolled out this year will cost up to 10 million won ($8,812), more than double the price of the same-size LED TV.

“Unless specific brands lead the trend, the time is not yet ripe for OLED,” Gray said.

“Asian producers other than Samsung and LG seem to be hesitant about jumping into the market due to price issue.

Samsung’s Zoeller also said during his presentation that smart devices will be brought to a new level with the rise of smart devices ranging from smartphones to tablet PCs, cameras and even voice-recognition air conditioners.

“Smart is the king,” he added.

Together with the IFA’s Lady in Red, the consumer fair’s model-like mascot, Zoeller demonstrated voice and gesture controls and facial recognition functions in the latest smart TV model ES8000, the model first shown in Las Vegas three months ago and marketed in Seoul in early February.

The key topic of interest at the event was smart TVs.

“Thanks to Internet connectivity, smart TVs will give the consumers the same benefits as smartphones and tablet PCs do.”

He forecast that next year more than 40 percent of all flat-screen TVs worldwide will have Internet connections, although “being connected with a TV is an additional challenge for consumers,” he said, given many of them don’t know how to use the new features.

In a lobby of a gigantic resort in this southern Mediterranean port city, global consumer electronics brands  ran booths to exhibit their latest goods. They included Germany’s Karcher, WMF, Sennheiser and Loewe; the Netherland’s Philips; the United Kingdom’s P2i; and Japan’s Panasonic and Sharp.

Samsung had the ES8000 OLED TV, Galaxy Player, Galaxy Beam and some other appliances on display. Given the nature of the conference as a preview event, there was no previously unseen product on display.

IFA, short for Internationale Funkausstellung Berlin, is the largest consumer electronics and hom appliances trade fair outside North America that serves as a showcase for some of the forthcoming innovations from top global electronic brands and offers an overview of the international market that attracts attention from trade visitors. The annual CES in Las Vegas, on the other hand, provides a sneak peek into the new products targeting the period before the IFA is held.

The four-day, press-only event under the IFA Global Press Conference title is held in different European locations each year, several months before the actual main annual trade fair in Berlin.

The venue for last year’s event was Alicante, Spain.

This year, the main trade show is scheduled from Aug. 31 till Sept. 5.