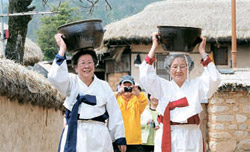 ANDONG, North Gyeongsang - Hahoe Village, known for its unique housing architecture from the Joseon Dynasty (1392-1910), was full of traditional spirit yesterday as two senior citizens replayed a long-lost scene from the past.

Wearing a gat, a Korean hat made of bamboo and horsehair, and dopo, a traditional gentlemen’s robe, the two seniors took a stroll around the village as if turning back the hands of time.

As frequently happened in previous times, they greeted people while holding a long tobacco pipe. To tourists passing by, they explained the history of the village and also scolded those who littered on the streets.

“It’s an honor getting to meet the descendents of yangban [the aristocratic class of the Joseon Dynasty],” said a 72-year-old foreign tourist. “I’m grateful to be able to have a glimpse into Korea’s past.”

Walking a few steps ahead, two village ajumma, or middle-aged women, were washing clothes using wooden sticks inside an old house. Others nearby were drawing water in a bucket from a well, which was a fond scene from 40 years ago.

“I never expected to hear sounds of wooden sticks again in my life,” said 59-year-old tourist Jang Geum-sook from Wonju, Gangwon. “The sounds are clear and appealing.”

Residents of Hahoe Village have rolled up their sleeves to preserve their traditional customs and way of life by performing past lifestyles and delivering long-cherished values. Efforts have been beefed up even more since 2010 when it was included on the Unesco World Heritage list.

Hahoe Village is a traditional area dedicated to the Poongsan Ryu clan that boasts some 600 years of history. Currently, there are around 120 households and around 230 residents registered. Queen Elizabeth II also spent a day in Andong in 1999.

For those who missed the performance, the event will be carried out every weekend until October. Around 70 residents will re-enact traditional customs for tourists. Every last Saturday of each month, the village will also perform a traditional wedding ceremony and funeral rite. Around 30 residents will participate in the traditional funeral parade. Their efforts come as there have been concerns that the village is losing its traditional attractions, including the unique houses dating back to the Joseon Dynasty.

It is the first time that the residents have decided to regularly introduce traditional practices to the public.

“For our next performance, I’m thinking of wearing a durumagi [a traditional Korean overcoat] instead of a dopo because dopos are usually worn during official rituals,” said Ryu Shi-jae, a 68-year-old resident, noting that durumagi are considered more casual.

A Japanese tourist from Fukuoka who was present at the site said, “It is hard to find old practices in Japanese villages,” and welcomed the move.

It looks like recent efforts have paid off. Yesterday alone, a total of 6,000 local and foreign tourists visited the village to have a look at the traditional lifestyle of the Andong people while also enjoying the fully-bloomed cherry blossoms.