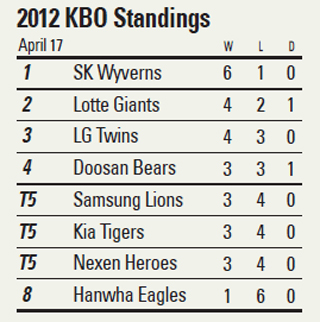 The SK Wyverns, led by manager Lee Man-soo, are cruising in this very early stage of the 133-game KBO season.

The Incheon-based ball club’s only loss of the season came on Thursday in a 4-2 defeat against the Nexen Heroes, but the team bounced back with a sweep against the Hanwha Eagles over the weekend.

Tough tests are waiting for the Wyverns this week as the team faces the Lotte Giants and LG Twins, both on the road.

Starting today, the Wyverns take on the Giants in a three-game series at Sajik Stadium in Busan. This is an intriguing matchup, with the Wyverns’ strong rotation going against the Giants’ power hitters.

The Wyverns’ team ERA is 1.86, the lowest in the league, while the Giants have started with a league-best 0.312 team batting average and a 0.385 slugging percentage.

The Giants were worried after slugger Lee Dae-ho left for the Orix Buffaloes in Japan, but other batters have stepped up to successfully fill his void. The team has so far produced a league-best of 81 hits in seven games.

After heading down to Busan during the weekdays, the Wyverns move up to the nation’s capital to face the Twins, who had a rough time against the Kia Tigers last weekend.

On Friday, the team suffered a bitter 8-6 loss after closer Radhames Liz gave up 16 straight balls to walk four Tigers batters during the 11th inning, which turned out to be the KBO record for straight base-on-balls with no strikes.

But the Twins will have time to boost their confidence before facing the Wyverns, as they meet league’s worst team, the Eagles, tonight.

Eagles pitcher Park Chan-ho, a former Major League Baseball All-Star, won his first game in the KBO last Thursday against the Doosan Bears after allowing two runs in 6 1/3 innings. The 39-year-old is expected to feature against the Twins in the next two days.

Meanwhile, the defending champion Samsung Lions will also have to travel around this week. The Daegu-based team will be at Jamsil Stadium in Seoul to face the Bears during the weekdays, while going down to Cheongju, North Chungcheong, to face the struggling Eagles.

Lions slugger Lee Seung-yeop, who returned to the KBO after eight seasons in Japan, notched his first home run of the season on Sunday against the Heroes.