Big Choi coming through in the clutch

Big Choi coming through in the clutch 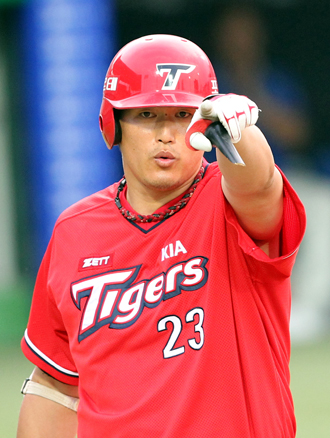 It has only been about a week since the opening pitch of the 2012 Korea Baseball Organization season, but Kia Tigers slugger Choi Hee-seop has already impressed after an offseason of controversy.

Since his return to the first-team roster on Wednesday against the Samsung Lions, Choi has a 0.444 batting average with one home run and six RBI in five games. The 33-year-old former Major League player has four hits in eight situations with runners in scoring position.

The clean-up hitter, who has played for the Chicago Cubs, Florida Marlins, Los Angeles Dodgers, Boston Red Sox and Tampa Bay Rays, had refused to participate in the team’s offseason training and reportedly requested a trade, saying he was tired of fans’ criticisms.

The left-handed slugger only played 70 games last year and belted nine home runs with 37 RBI while struggling with injuries.

But after a bitter tug-of-war with the club, Choi apologized and re-signed for 107 million won ($94,000), 203 million won less than last season’s contract.

For his reckless behavior, the Tigers also slapped on a 20 million won fine while relegating him to the rehabilitation squad to train until he recovered his fitness. Choi started the season with the Tigers’ Futures League team.

Tigers manager Sun Dong-yol was reluctant to bring up Choi to the first-team roster early on in the season. When he hit a grand slam against the NC Dinos in the Futures League on April 5, Sun paid little attention, saying “hitting one or two home runs is not important.”

But with Kim Sang-hyun suffering from a left palm injury and Lee Bum-ho also recovering from his left thigh injury, Sun decided to include Choi on the first-team roster against the defending KBO champs.

And the move has paid off. Choi has shown a change of attitude and a greater commitment to the squad. His batting is also noticeably more aggressive.

In the match against the Twins on Sunday, Choi hit a two-run homer in the top of the first inning. It was his first homer in the KBO since September 8, 2011.

“I know we have lot of injured players,” Choi said to Ilgan Sports, the JoongAng Ilbo’s sports daily, on Sunday.

“When I got back to the first team, coaches said to me that the team is finally starting to ‘find our center of gravity.’?”

The Tigers, who are widely seen as a strong title contender along with the Lions, are currently struggling offensively with a 0.224 batting average, the worst in the league.

The 2009 KBO champions have also produced only 26 runs in the last seven games, the second-worst record behind the Hanwha Eagles.

But the club is showing signs of progress with Choi’s return. And until Kim and Lee return, Choi knows he needs to step up to lead the Tigers’ offense.

“This year, instead of increasing on-base percentage, I want to bat more aggressively,” Choi said.