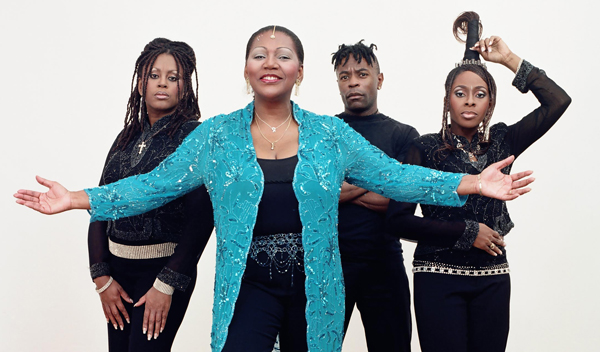 Boney M visits Korea for concerts later this month. Lead vocalist Liz Mitchell (second from left) says the concerts will satisfy both middle-aged as well as younger Koreans. Provided by the organizer


Most Koreans in their 50s should be able to hum to songs like “By the Rivers of Babylon” and “Daddy Cool” and remember a few moves to “Happy Song.”

Boney M, a group that led the disco era of the late 1970s, is well known in Korea for their colorful, over-the-top fashion and distinct dance moves.

Younger Koreans may not be all that familiar with Boney M, but they surely have heard the song “Sunny,” from the Korean movie of the same name that used the song on its soundtrack.

The movie “Sunny,” about middle-aged women reminiscing about their teenage years and more, was an unexpected hit last year and evoked strong nostalgia for Koreans in their 50s, while it was something new and different for younger Koreans.

Now there is a chance to relive the disco era as Boney M comes to Korea for the third time since it put on performances in 2005 and 2007, playing in four different cities such as Seoul, Daegu, Busan and Daejeon.

Created in 1975, the group combines Jamaican tunes with disco music and has had notable international success.

On Monday, Korean media reported that in addition to its four scheduled concerts, Boney M will also take part in a concert tomorrow aimed at denouncing China’s forceful repatriation of North Korean defectors.

The JoongAng Ilbo recently interviewed Liz Mitchell, lead vocalist and the only original member of the group, via e-mail.

She said “the status of Korean pop music is getting higher in the international society,” and that the group is “glad to be able to visit Korea at this time.”

Q. Last year, the song “Sunny” was very popular because it was featured in a movie of the same name. Did you know about this?

A. Sure I do. I heard through a fan that there was “Sunny” fever in Korea. I heard that the movie was a great success. What I think is, the movie itself and the acting of the actresses may have been good, but the way the director and the producer reflected the phases of the times contributed greatly to the film’s success.

I hope that our concert in Korea also becomes one that can also bring up special memories for Korean fans. “Sunny” is a love song that everyone, regardless of their age, loves. I hope to see the movie “Sunny” when I go to Korea. I want to bring up my high school memories through that movie.

Some of your songs, such as “By the Rivers of Babylon,” are based on Christian beliefs. Are there special reasons for that?

I don’t insist on singing Christian music only, and I don’t think that singing only those songs is necessary. “By the Rivers of Babylon” has lyrics that come from the Bible, but we don’t perform it with Christianity in mind.

It is a song that imbues the Israelites’ prisoners lives in Babylon with modern meanings, and expresses the desire for freedom for all people who are being suppressed in this world.

Of course I am a Christian and I believe in God. The reason I think my songs have resonance in people’s hearts is because my love as a Christian is delivered to their hearts. The spiritual connection that I have with God flows out from my heart. I think that my life of being born black and being able to stand on stage until now is a miracle itself.

What’s your favorite song of yours and what is the main message that you are trying to deliver with your music?

I like “Sunny” and enjoy singing it. It’s the same with “Heart of Gold” and “Mandela.” I also like “No Woman, No Cry” because it is a song related to my home, Jamaica. But I can’t compare these songs with each other. I can’t like one song better than the other. I like all songs the same. Each song was made with a unique message, and each one gives a different kind of joy and cure.

You sing very difficult music with fast tempos and rhythmic beats even though you are nearly 60 years old. What is the secret to keeping your voice like that?

On the physical side, I try to speak less. I try to make my throat rest when I have the time, and I try to avoid dry and damp conditions, and I don’t expose myself to the air conditioner. But this is what everyone who sings does. So it is nothing special.

If you feel that my voice is still nice, then it is a natural grace. If I say it in other words, the reason I am keeping my voice in performance shape is because there are still fans out there who wish to listen to my songs.

If there is music, then no one gets old. I am sometimes lazy enough to stay still.

However, when I get on stage, I am full of energy from that point. My hope is to stand on stage until my energy to sing is exhausted.

You have already performed in Korea twice. Do you have any special memorable episodes from those experiences?

I can’t forget the welcome dinner on the first evening that was held at a great Korean restaurant on the traditional street, Insa-dong. It wasn’t easy squatting down, but the fusion Korean food was so fantastic that I couldn’t close my mouth.

Also, I remember the thoughtful gifts that people would give me at the signing after the concerts. One person gave me green pepper that she cultivated herself.

Everywhere I went - restaurants, shopping places - there were people who recognized me and warmly welcomed me.

Do you know any Korean singers?

I met Bae Chul-soo during the last trip to Korea. Of course, I met him not as a singer but as an MC, appearing on his program. I also know Girls’ Generation. I know through the news that Korean music and the young groups are enlarging their influences to the world. And recently I heard about the group called the Phantom that did a cover version of my song “Gotta Go Home.” They say that they are a great idol group.

Which songs will you perform in Korea? Please let us know what the show is going to be like.

First, I am planning to sing songs that were very popular in the ‘70s and ‘80s when I was young - of course, these will be the songs that Korean fans will also wish for - and the title songs of many albums that were released with my name. Other than that I am thinking of singing a few ballads and gospel songs that show my life and faith.

As it is a performance at a great theater [Sejong Center for the Performing Arts], I will try my best to make it a great performance. I hope to meet many fans at the place also.

Along with this, I hope young fans in their teens and 20s can come together with their parents of my age and break the wall between them and have a warm and special time of sharing their hearts together.