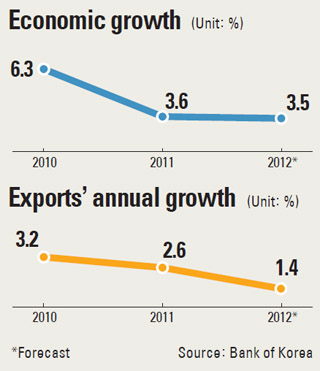 The Bank of Korea yesterday revised this year’s economic growth outlook from the 3.7 percent estimated in December to 3.5 percent.

That would be half the growth rate in 2010 and lower than last year’s 3.6 percent.

“The recent improvement in uncertainties related to the sovereign debt problem in the euro zone plays a positive factor for [Korea’s] economic growth,” said Shin Woon, head of the research department at the BOK. “However, slowing global economic growth and the burden of rising crude oil prices is likely to offset the positive influence.”

The new forecast was based on the assumption that the global economy would grow 3.4 percent this year, down from the previous forecast of 3.6 percent.

Most alarming from yesterday’s report was a downsizing of growth prospects for exports, which have been the engine that kept the nation’s economy growing since the global financial crisis of late 2008.

Export growth is expected to shrink to half of last year’s.

The central bank forecast outbound shipments to grow 1.4 percent on-year, down from 2.6 percent in 2011.

Last week, the Asian Development Bank revised its outlook for Korean economic growth from a 4.3 percent prediction in September to 3.4 percent, citing economic weakness in Europe and the subsiding of China’s rapid growth.

The ADB projected China’s economy to grow 8.5 percent, down from last year’s 9.2 percent.

The domestic market is not likely to ride to the rescue.

The BOK revised its estimate for growth of spending in the private sector from the previous 3.2 percent to 2.8 percent. The central bank cited high home debts and a flat real estate market as factors.

Household debt in Korea has reached a cumulative record of over 900 trillion won ($790 billion).

Crude oil was a major factor for the downgrade of estimated economic growth. In December the central bank projected the average unit price of oil imports for this year to be $102 per barrel. In its revision, it raised the estimate 16 percent to $118.

Despite its lower estimate, the central bank thinks the first half of the year will be a soft patch, and the Korean economy will get back on its feet in the second half.

The BOK projected that in the first six months the economy will grow 3 percent, which will accelerate to 3.9 percent in the second.

As a result, the central bank predicted that the economy would post 4.2 percent growth in the following year.

“Spending in the private sector will likely increase as purchasing power will strengthen resulting from higher wages and an improving job market,” Shin of the BOK said.

The central bank revised its inflation forecast from a previous 3.3 percent to 3.2 percent and said 350,000 new jobs will be created this year, up from the previous estimate of 280,000.