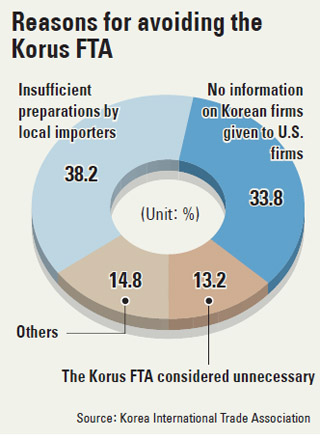 Amid growing concern over the effects of the month-old free trade agreement between Korea and the United States, many small companies are having difficulty making use of it due to complex provisions and language barriers, a survey has found.

In a recent poll of around 200 local importers conducted by the Korea international Trade Association (KITA) and Korea Importers Association, the companies said the deal’s rules of origin and tariff cut terms are sufficiently complicated enough to put them off of making use of it.

“As we don’t have employees fluent in English, the FTA has become something of a headache,” said a chief executive of a small auto parts company.

“It takes too long to produce all the required documents in English, to contact U.S. partners and to understand the long list of tariff cuts.”

The CEO, who declined to reveal his company’s name, said many small businesses had high expectations of the Korus FTA but are now afraid of being disappointed.

In international trade, goods that indicate their country of origin quicken the customs process and so are subject to tariff benefits.

Under the Korus FTA, one of three parties - the Korean producer, exporter or importer - is legally required to attach documented certificates of origin so the goods can be made subject to the appropriate tariff cuts.

If none do so, they may be slapped with hefty fines by the U.S. customs authority should this come to light.

According to KITA, a similar provision in Korea’s FTA with the European Union is much clearer. Under the agreement, which went into effect last summer, it is only mandatory for exporters to attach the certificate.

However, many exporters and importers in Korea and the U.S. are either not aware of the clause in the more recent pact or they expect other parties to fulfill the obligation, it added.

As the tariff cuts mapped out under the deal only apply to goods deemed to have originated in either the U.S. or Korea, this is causing problems in the domestic textile industry. It depends on cheaper countries in the region for much of its fabric, but the U.S. does not recognize those made in China under original equipment manufacturing contracts by Korean exporters as being Korean-made.

Importers of U.S. sport apparel like Nike and Adidas are also unable to receive tariff cuts because most of their sportswear imports are also made in China.

“There is no official plan to reduce consumer prices of imported Nike products in the Korean market,” said an official at Nike.

The textile industry was expected to be one of the big beneficiaries of the Korus FTA before the deal went into effect. As tariffs on textile products averaged 25 percent, higher than the average rate for other U.S. products here, textile manufacturers in both countries were looking forward to the benefits of the pact.

However, only 12 percent of the textile companies in the KITA survey said they are using the Korus FTA, and 25 percent said they have no plan to do so.

Moreover, the survey found that 38 percent of all importers are not seeing cuts in import tariffs, mainly because they do not know what products are eligible.

Another 33 percent of the respondents said U.S. exporters are not that willing to make use of the FTA.

“When we ask U.S. exporters to attach certificates of origin, they give blunt responses or just don’t reply at all,” said one local importer.

Song said the Korean government and KITA are planning to provide educational and training sessions for small businesses to help them enjoy the tariff benefits and communicate better with their U.S. partners.

However, she called for the U.S. government to cooperate in raising awareness of the Korus FTA.