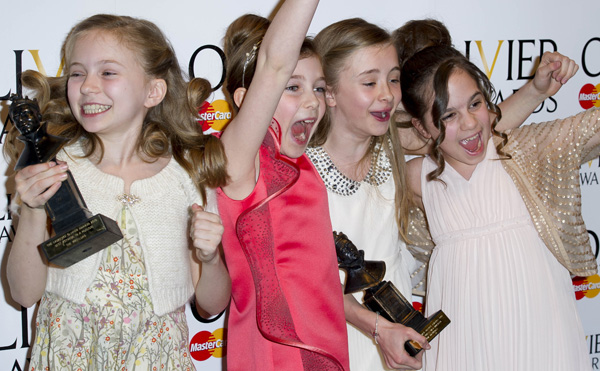 “Matilda the Musical,” based on the Roald Dahl children’s story about a precocious child with psychokinetic powers, won a record seven Olivier Awards on Sunday, beating the previous best of six on British theater’s biggest night.

Among the prizes it picked up at a red carpet ceremony held at the Royal Opera House was best actress which went to the four girls who shared the title role.

Cleo Demetriou, Kerry Ingram, Sophia Kiely and Eleanor Worthington Cox, aged between 10 and 12 years old, were the youngest-ever recipients of an Olivier Award.

But the shared honor did have a precedent - the boys who played Billy Elliot in the ballet musical took the best actor in a musical prize in 2006. Matilda’s other honors on the night were actor in a musical (for Bertie Carvel), new musical, director (Matthew Warchus), theatre choreographer (Peter Darling), set design (Rob Howell) and sound design (Simon Baker). Reuters